The RPG trooper was the basic anti-armour infantry unit of the GLA during the War against the GLA.

Armed with the Type 69 RPG, a Chinese copy of the famous RPG-7, the RPG trooper was trained to fire at both ground and air targets. A pair of RPG troopers would emerge from the Tunnel Network to protect its entrance when it completed. Dr. Thrax equipped his RPG troopers' weapons with toxin-tipped rockets, increasing their damage output.

A squad of RPG Troopers

RPG troopers fulfilled the basic function of anti-vehicle infantry in the GLA. Garrisoned in buildings, RPG troopers could provide a solid defense against attacks by enemy vehicles. As the war progressed, the GLA developed the battle bus, which could also allow infantry to fire from within it, acting as a moving bunker. This protected RPG troopers from machine gun fire and simply being run over, allowing them to hit-and-run better against slow-moving tanks. Like all other infantry, they were vulnerable to anti-infantry fire, and their weapon was ineffective against other infantry. 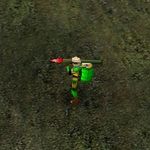 Dr. Thrax modified RPGs used in his ranks to fire rockets that spread toxins (with Anthrax Beta enabled by default) on detonation. They can be upgraded with Anthrax Gamma do increase damage output by 50%. Hence, his RPG troopers have a particularly effective Stinger tracking ability which quickly nullifies nearly all airborne threats.

In the mission Area Fifty-Two, Dr. Thrax's RPG troopers are renamed to toxin troopers, sporting a different icon and a slightly different model.

Rodall Juhziz' RPG troopers have warheads which have a more explosive impact than the standard ones. His RPG troopers, like most of his other infantry, are also equipped with explosives when upgraded and will detonate when killed.

In skirmish and multiplayer, Kassad does not have a unique variant of the RPG trooper. However, in the mission Hidden Agenda, his RPG troopers are fully stealthed.