Radar (Radio Detection and Ranging) was a surveillance technology that was used to its fullest extent in Second World War, and the Tiberium wars that followed. As its name implies, radar made use of simple radio and microwave transmissions to reveal key locations to commanders via the EVA network, allowing them to command and guide their forces with precision and efficiency. On top of this, the availability of a radar station granted commanders access to secret communication channels with their respective militaries, opening availability to special technologies and soldier divisions to support their war efforts.

Unfortunately, all variations of radar technology suffered from similar problems. They required an enormous amount of outside data and on-field reporting to provide optimal feedback, as well as needing a considerable amount of energy to function at all. The loss of power to a base always meant the loss of radar feedback, making an army effectively blind to their surroundings. If the power requirements of a base became too taxing for its local power supply, radar would also be lost. 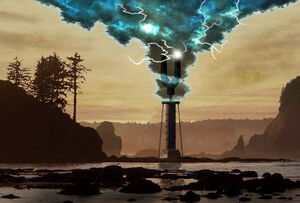 A GAP Generator in action

During the USSR's invasion of Europe, radar technology was used extensively on both sides of the conflict. Both the Allies and the Soviets devoted special divisions of their precursor EVA teams for the sole purpose of recording and reporting radar data, resulting in both sides having ultimately identical equivalents of the same technology. Both versions of radar also had identical energy needs and construction stability, and were referred to as "Radar domes" on both sides of the conflict.

It was in response to the USSR's radar proliferation that the Allies developed the Gap Generators, a device that interfered with the radio and microwave signals of the Russians to the point of making their data illegible. A portable version of the device also existed.

Russian Sam Site's, airfields, and Helipads were dependent on the existence of a Radar station to be constructed, as both required the aerial Intel the stations provided greatly.

Radar stations returned to normal service for both GDI and Nod by the time of the Second Tiberium War due to interference from Tiberium in the atmosphere. Ion storms were a problem for many complex electronics, including radar.

Satellite communication would still be used by the ion Cannon uplink attachment for the upgrade center.

Due to the increased importance of radar some radar featured were built directly into construction yards.

Nod is able to disable their opponents' radar temporarily by launching a Radar jamming missile in an Operations center.

Due to the mobile nature of the conflict radars were built into crawlers. Nod's support crawlers used radar jamming missiles to disorient enemy crawlers.