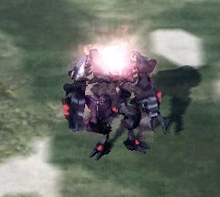 A Redeemer about to activate its Rage Generator

The Rage Generator is a new psychological weapon developed by Nod. As the name implies, the device causes enemy units to turn against each other, filled with feelings of fear and anger. While the details remain unknown, the Generator works by subliminal brainwave modification, and is able to do this at extreme ranges. Working at a powerful resonant frequency, even vehicle operators can be affected.

Because of the cost and bulk required, and perhaps to enhance its symbolic role, the Rage Generator is only used on Redeemers. Its effect is not permanent, therefore any hostiles affected may revert to its original targets. This weapon is extremely deadly as it can not only corrupt the minds of the GDI but is also able to inflict rage on the alien minds of the Scrin, allowing the Redeemer to win almost every battle. The Rage generator is also effective on enemy Epic Units.

It is comparable to the Hallucinogenic grenades used by Confessors and Confessor Cabals, with the only exception that it affects vehicles also.