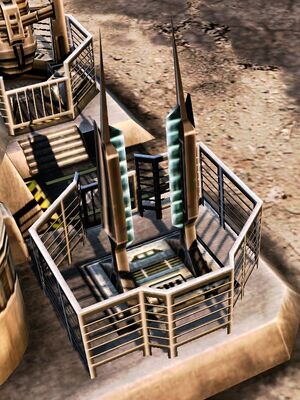 A large railgun prototype at a GDI Tech Center 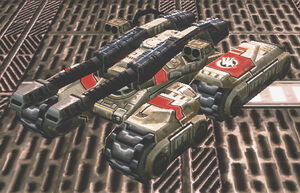 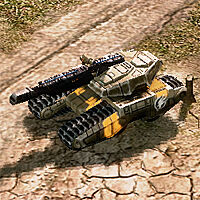 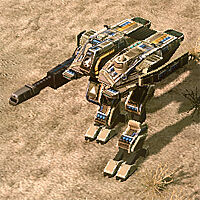 Railguns are an advanced type of projectile weapon that act similarly to normal ballistic cannons, but are fundamentally different in operation. Instead of traditional artillery shells propelled by an explosive accelerant, railguns fire a solid metal "bullet" that is accelerated along electromagnetic rails using Lorenz forces; as such, the bullet does not need to be magnetic, but merely conductive. Their primary advantages over traditional cannon weaponry are their greatly increased muzzle velocities and far simpler and more reliable operating mechanism. Also, the lack of any kind of explosive in their ammunition makes it far easier to manufacture and much safer to store and handle.

Large scale railguns were used on the Mammoth Mk. II walker and served admirably, being capable of destroying most vehicles and structures in just two or three shots. The Ghostalker, a hero of the Forgotten, was capable of withstanding the massive recoil such a weapon emitted and used a portable, handheld version of it to devastating effects against Nod forces, which could also plow through enemy forces, as the projectiles usually passed through multiple targets.

Following the Second Tiberium War, the technology was further developed by GDI, who eventually managed to create a safer, more efficient weapon for Zone Troopers. A version was developed that was supposed to fully replace the conventional cannons of the Predator, Titans and Mammoth tanks, by the middle of 2047 but was only available as an upgrade during the Third Tiberium War. However, this new version of the Railgun could no longer blast through multiple targets. The very zenith of railgun technology was confirmed to have been placed in the hands of GDI's highly capable Commandos and sniper teams - the Commando's weapon is an automatic railgun prototype, extremely efficient against infantry but lacking in power against vehicles, while the snipers operate a special railgun designed for sniping infantry and, like the Commando's, also lacking against armour. This is due to a less powerful capacitor and smaller projectiles, which can pierce any infantry armour, but are ineffective against vehicles. Tank railguns are only meant for tanks and structures; not heavy infantry such as Shock Troopers, Zone Troopers and even Black hand. However, most basic infantry are killed in one shot.

It is also interesting to note that during the Third Tiberium War, the 22nd Division's Juggernauts M3A Variant were outfitted with railguns.

During the Ascension Conflict, a more advanced variant of railgun known as "ionized railgun" became the standard issue equipment for GDI units such as the AT-22 Hunter tank destroyer.

Railguns are an upgrade that can be purchased by GDI commanders at the Tech Center for 5000 credits (though in earlier versions of the game it was cheaper), making it one of the most expensive upgrades in the whole game. Naturally this leads to a long research time as well, so commanders shouldn't expect to get the upgrade very quickly after purchasing it.

Railguns improve the firepower of all affected units. In the Kane's Wrath expansion, Guardian Cannons (including those mounted on deployed Rigs) are also affected by the upgrade, as well as Titans, Mammoth and Predator tanks.

The most noticeable effects of the Railguns upgrade is that all attacks by affected units hit a lot harder against vehicles and do instant damage; normal cannon shots take a short period of time to travel to target, giving the target a greater chance of getting extra shots off before it is destroyed. Railguns also improve anti-infantry ability; some infantry troops will be destroyed by a single shot from a railgun-upgraded unit. However the damage bonus is still not enough to make tanks efficient against infantry in ranged combat; it only helps offset this weakness.

Railguns are generally considered an essential late-game upgrade for GDI commanders it is available to, since GDI tactics are very reliant on using tanks and Rigs. With the upgrade installed, Mammoth Tanks become the most cost-efficient heavy unit in the game for countering enemy armor.

The Steel talons have a special power that increases the rate of fire for all railgun using vehicles but at the cost of damage.