The San Francisco Red Zone in an Ion Storm 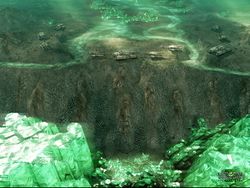 GDI units in a Red Zone

Red Zones are areas of the planet that were contaminated by vast amounts of Tiberium, and are frequently hit with Ion storms. Venturing into, over, or even near these wastelands is extremely dangerous, especially for infantry vulnerable to Tiberium. In 2047, Red Zones covered approximately 30 percent of Earth's planetary surface, however by 2062 this had increased to 98 percent.

Scientists hypothesised that Tiberium was and is terraforming the planet for an alien civilization. It is not known if this is actually the case, although more scientists are coming to support this hypothesis. The evidence is that there were multiple meteors that had impacted on Earth which are related to the emergence of Tiberium, and that, given that they come from outside the solar system, the chance of such random collisions with Earth occurring in a short time period is statistically almost nil. If terraforming was the case, scientists argued, a visit from the aliens involved wouldn't arrive before too long, as there is enough Tiberium on the planet to fuel the entire Earth's economy for at least a few decades. The scientists were proven right when the Scrin finally invaded Earth.

Owing to the prevalence of Tiberium, the Red Zones are almost completely uninhabited, save for a few groups of Forgotten and other Tiberium-based life, such as Visceroids (see Tiberian Wildlife). Indeed, Red Zones were lethal to non-mutated humans, as even a small breach in combat armour would cause the wearer to be infected by Tiberium and would die or mutate shortly afterwards.

Yellow Zones (and the people in it) are constantly under threat from rogue ion storms and other threats coming from red zones. After the Liquid Tiberium accident, many of the Earth's Yellow Zones (especially the ones in the Mediterranean Sea) turned into Red Zones.

All Red Zones were designated by the Scrin as locations for Thresholds. The Battle at Ground Zero and the Battle for Kane's Tower occurred in Red Zones.

Shortly after 2052, Tiberium underwent its next evolutionary stage and began growing at a rate several times faster than it was before, to such an extent that by 2062 much of the planet had become a Red Zone, even areas designated as Blue Zones had been completely overrun. As a result, humanity itself was on the brink of extinction, before the whole planet was consumed by the deadly mineral. (It should be noted that this is the state the Scrin expected the entire Earth to be in during TWIII).

By the Ascension Conflict, the Tiberium Control Network had long since eliminated all uncontrolled Tiberium deposits, including Red Zones. The former red zones were deemed to be habitable once more, but it may take some time for GDI to reconstruct those regions that were once heavily scarred by Tiberium.