The Redeemer is Brotherhood of Nod's epic unit in Kane's Wrath.

After their first encounter with a MARV, Nod realized they could lose control of the red zones and needed a unit to counter GDI's new weapon. Using covert forces, Nod troops under LEGION's command succeeded in raiding a ZOCOM MARV production center and capturing a Reclamator Hub. Using GDI's construction plans and the Avatar's basic design, Nod then started developing its own 'Epic Unit'.

The Redeemer was essentially a gargantuan quadrupedal mechanized walker, based on the fundamental design of the Avatar Warmech, though more significantly armed and armoured. It is equipped with a Obelisk-based tri-part laser on its left hand, which is able to cut through the heaviest of armour. The Redeemer also possesses two MARV-derived infantry hardpoints that can be upgraded at the commander's discretion.

In addition, the Redeemer is also equipped with a unique Rage Generator. Emulating Kane’s presence on the battlefield, it utilizes subliminal brainwave modification to ignite feelings of fear and anger, turning enemy forces against one another. Unlike the effects of a hallucinogenic grenade, the Rage Generator operates at a powerful resonant frequency that can penetrate vehicle armor and drive vehicle pilots mad, even at a significant distance.[1]

Infantry upgrades for the Epic Unit

The Redeemer was armed with a long-range, tri-part laser derived from the Obelisk of Light. The laser essentially split into 3 beams capable of briefly sweeping over a small area. This design choice was likely intended to aid in combat against infantry squads (akin to the Obelisk of Light's sweep mode), but spread out groups of soldiers can better avoid the focused beams.

The Redeemer could also bolster its already formidable laser, like the Avatar. However, unlike its predecessor, which destroyed Nod vehicles for added firepower, infantry sacrifice their weapons to the Redeemer, possibly traveling within the Redeemer to operate the weapons. These upgrades depend on the units 'redeemed':

Another weapon was the glowing device on the Redeemer's back, the Rage generator, which was able to drive enemy units into a frenzy, causing them to ignore Nod units and attack one another, disobeying their commanders' orders. Units that were already targeting something were not affected. The Rage generator had no effect on defensive structures (though the structures would attack affected units). The Redeemer can crush any non-epic unit by simply walking over them, thanks to its size, though its slow speed can prevent it from taking advantage of it. Its armor and bulk prevented its legs from being destroyed by Commandos.

However, the production of such a device was resource-intensive; its size was roughly twice that of a standard Avatar. In addition, it required its own production structure, the Redeemer Engineering Facility, to deploy. The expense and technical expertise required for the walker's construction is so great that a commander was allowed to have only one Redeemer under their command at a time. However, those commanders who distinguished themselves through capturing rogue sub-factions were awarded with the option of constructing additional Redeemer units, up to a total of 3. However, each Redeemer, as a symbol of Kane himself, must have had its own Redeemer Engineering Facility. 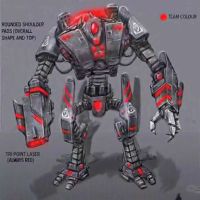 The Redeemer is undoubtedly the best Epic Unit for countering other epic units, though it is likely to come off heavily damaged even if it wins. Its laser is extremely effective in destroying single Targets, like Tier 3 units, dealing high damage to a single target. In contrast, the MARV does moderate damage over a relatively large area and the Eradicator deals high damage over a line in a similar fashion to the Devastator Warship. This is partly due to the design history of the Redeemer, being based on the Avatar and designed specifically to counter ZOCOM's MARV.

However, it only features 2 infantry hardpoints (partly due to the need to fit the Rage Generator on the top). The MARV, on the other hand, features 4 and the Eradicator has 3. Of the 3 epic units, the Redeemer is the most vulnerable to mass attacks since its main weapon is the most ill-suited to dealing with multiple targets and the Redeemer can't move and fire its laser at the same time, though the Rage Generator does help with countering them, though it's not guaranteed. Redeemers who possess two flamethrower mounts, in contrast, can deal with mass amounts of infantry with stunning ease, although mass tank rushes still pose a problem. Redeemers armed with Flamethrowers will fire at anything in range with the flamethrowers, making them quite effective if they happened to be parked in the enemy's base. Nod and the Marked of Kane's Cloaking Field can also vastly increase the survivability of the Redeemer, giving it another edge over the MARV or Eradicator. However, unlike the other two, the Redeemer does not generate funds in any way or form (it can neither process Tiberium nor can it recycle destroyed units). Also, Nod lacks the ability to repair the Redeemer while it is away from a friendly base, requiring a Saboteur to upgrade a hardpoint slot.

The Redeemer's greatest weakness is the same as that of other epic units: it can't attack air units with its main weapon. While garrisoned rocket squads can attack air units, they aren't very reliable and effective for that task. Coupled with it having the weakest armor of the epic units, this generally means that it's also the most vulnerable.

Unlike its smaller cousins (Avatars and Purifiers), Redeemers do not leave a husk when destroyed, meaning they cannot be stolen by the enemy. This also means that in the event where one of these war machines fall, a Nod commander will have to deploy a new one.

Bear in mind that the Redeemer that the player has to deploy in Africa can be sometimes bugged, firing its laser at a less than half the rate of fire the normal Redeemer has. This could be due to the fact that the one deployed in Africa is the very first prototype, while all the Redeemers after that one could be the finished design.

Additionally, rapid firing weapons such as the Militant Autocannon or Black hand flamethrower/Tiberium Trooper weapon, can interrupt the firing animation of the Redeemer and cause it to miss a firing cycle.

The Redeemer has the fewest hardpoint slots of any epic unit, its weapon has no splash damage, and it cannot fire on the move. It is ill-suited to inflict large amounts of damage to armored targets with its weapons, but a combination of stealth and the Rage Generator make it one of the hardest epic units to detect.

In Global Conquest, Strike Forces with a Redeemer raises unrest in nearby cities due to the Redeemer's rage generator.

The infamous Redeemer proven to crush even Mammoth 27s.

The Redeemer was first used in Africa, after Nod scouts reported the existence of the MARV. After destroying the MARV and capturing data from the Reclamator Hub there, LEGION was ordered to construct a Redeemer. After destroying another 2 MARVs, the Redeemer laid waste to the 2 ZOCOM bases in the area. There are also unconfirmed reports that LEGION used the Redeemer again to battle with an elite Traveler-59 Eradicator and that he used as many as 3 Redeemers (1 from the Marked of Kane, another from the Black Hand and yet another from the baseline Nod faction) to reclaim the Tacitus. After receiving Black Hand and Brotherhood reinforcements, LEGION proceeded to construct 2 additional Redeemers, which he then used to annihilate all resistance with. The Redeemer was not seen in the Fourth Tiberium War, having been replaced by the new Avatar and Widow heavy units.

When ordered to use the rage generator[edit | edit source]