Reinforce Phoenix Base is the first mission in the GDI campaign in Tiberian Sun.[1]

Emergency transmissions from GDI forces in this region indicate that Phoenix Base is under attack from Nod troops. It is imperative that the base be restored by building a Tiberium Refinery and a Barracks. Once the base is functional, all Nod forces in the area must be destroyed. 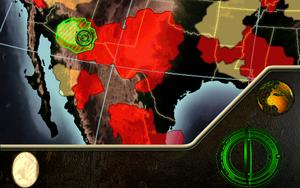 On 2 September 2030, aboard GDI's headquarters, the space station Philadelphia, General James Solomon received a call for help from Commander Tao at Phoenix base, whose forces have been wiped out by a surprise attack. Similar reports were coming in from all over the world, and just as General Solomon was pondering the meaning of this, he was contacted by Kane, long thought to be dead.

Kane taunted Solomon, saying that he had seen the Tiberian future and that it was his destiny to lead all mankind. Solomon simply responded that mankind had forgotten him, to which he replied with maniacal laughter. Meanwhile, GDI Commander Michael McNeil, who was practicing his skills at GDI's Southwestern training facility was interrupted by his friend Chandra, who told him that Solomon wanted to speak with him and took him to the Kodiak, McNeil's command ship.

In the Kodiak, Solomon informed McNeil of the Nod attacks and Kane's return, and ordered McNeil to retake Phoenix base, giving him a squad of GDI's best jump troopers to clear the way.

At Phoenix base, two Nod infantry were gunning down a civilian in a small settlement outside the base while a Nod cyborg chased a helpless GDI soldier. Just as the soldier cried out for reinforcements, McNeil's troops arrived via drop pods and quickly destroyed the cyborg. The soldier informed his rescuers that Nod forces came out of nowhere and destroyed the base's barracks and refinery, and suggested rebuilding them before Nod launches another attack.

After rebuilding the base, McNeil found and destroyed a small Nod outpost in the vicinity, securing Phoenix Base.

You start with a large group of light infantry and two Wolverines. Use them to mop up the Nod forces near the Tiberium field and start building a refinery. In the meantime, move your forces west, then south, before pushing east and destroy any Nod infantry and attack buggy you see. Once the refinery is finished, start building a barracks.

You can wait for the barracks to finish to train some more light infantry, but the quickest way is to simply move your forces northeast across the bridge and destroy the small Nod outpost there. There is another bridge to the southwest, but if you approach it, it will be destroyed by a meteor storm.

Once the Nod forces and the outpost have all being destroyed, the mission will be complete.