U.N. Sanctions is the eighth mission in the GDI campaign of Command & Conquer.

The GDI had recently ended its 'tactical isolation procedures' and it was now possible for field commanders such as James Solomon to access the GDI central command. But weakened by GDI funding cuts Nod forces while on the retreat in Europe had begun a major offensive in Africa.

GDI forces advancing into Austria quickly captured Salzburg. However the Nod counter-attack proved fierce and their base on the outskirts of the that city soon came under heavy attack.

When the GDI commander arrived he found the base heavily damaged with key buildings like the Construction yard and the War factory destroyed. Without either of these buildings GDI forces would be unable to construct new buildings or vehicles. However the GDI's Repair facility was still standing which meant that as ordered the GDI commander was able to repair not only the buildings but also the vehicles.

Despite having no means of creating new vehicles, GDI were able repair their existing vehicles with the help of the Repair facility and with the help of infantry reinforcements they destroyed the Nod forces and their base. 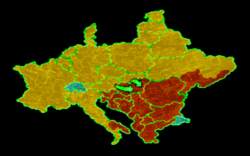 The GDI goes on the offensive in Hungary.

With the fall of the Nod base near Salzburg the city was secured and Nod counter-attack was broken. The GDI offensive moved on into Vienna, toppling the Nod regime there and swiftly driving all remaining Nod forces from Austria.

Nod forces lost control of Turkey but Greece defected to its cause.  Nod forces in northern and central Italy were eliminated though they advanced in the south and the new Nod offensive into the Ukraine from the south continued to make progress.