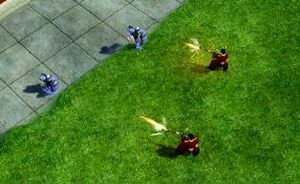 The Legion Riot Shield is a piece of standard issue equipment used by Allied Peacekeepers, allowing them to withstand a hail of enemy gunfire.

A design based on riot shields used by NYPD officers, the Legion Riot Shield is a heavy shield designed to withstand small-arms fire. While they are too bulky to be used with the Peacekeepers' shotguns simultaneously, Peacekeepers are trained to rapidly switch between the two to overcome this.

The riot shields allow Peacekeepers to close the distance effectively without exposing themselves to enemy fire, and a shot from their Grummond-8 shotgun at close range can send even heavily armored infantry flying. The Peacekeepers can also use them to breach fortified enemy buildings and neutralize all hostiles inside, as long as they are not outnumbered.