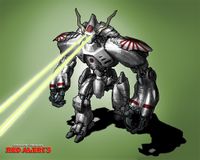 One of the strongest robots fielded by the Empire, the infamous King Oni.

Robotics is a branch of research that deals with developing machines that possess the mechanical dexterity of motion, and some form of environmental awareness.

These are complex machines, separated from mechanized walkers, which are generally human-piloted vehicles, from cyborgs, which are the union of robotics and biology

The term was originally invented by Czech playwrite Karl Kapek (Karel Čapek) in 1920 in his play "Rossum's Universal Robots," afterwhich it quickly gained presidence in the the budding science fiction and later scientific community at large. Due to Albert Einstein's manipulation of the time-stream by removing Adolf Hitler from existence in hopes WWII would be prevented, the science of robotics was able to flourish at a rate that would have been impossible in the pre-manipulation timeline, resulting in a many great breakthroughs in the field that would have taken many more decades to accomplish normally.

All four factions that partook in the wars following the First World War made use of robotics in their combat efforts, albeit in differing degrees and ways. 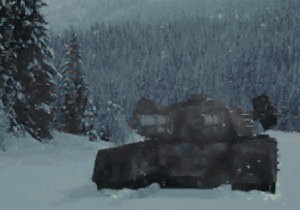 The first true military application of robotics were the Super Tanks, powerful tanks built by the Soviet Union and governed by computer programming. Given the resources of the time, this programming was significantly primitive by the time its programmer defected, and the tanks went berserk. The prototypes were destroyed by Allied Forces in the area.

A later example of robotics came in the form of the first Demolition Trucks, which used robotic remote control "driver" apparatuses to guide the explosive vehicles to their destinations. It is unclear which of the war's two factions originally created these machines, as both sides made use of them extensively; though the excess destruction and simple directness the trucks carried inately with them strongly suggests Soviet manufacture.

The science of robotics became a much greater battlefield asset during World War III and the Disaster than it had been in the Second, in ways both obvious and subtle. Robotic technology was found in most of the various tank models used during the different wars, with artificial intelligence (AI) playing a much-welcome role in streamlining informational input/output in various EVA networks. More up-front examples of robotics included the anti-armor Terror Drones and the hovering Robot Tanks, both of which proved useful after the Psychic Dominator Disaster in combating the forces of the psychic madman Yuri due to their inability to be mind-controlled. Yuri himself also made use of robotics with his hallucinogen-spewing Chaos Drone.

Perhaps the most advanced forms of battlefield robotics came during the third iteration of the Third World War under the stewardship of the Empire of the Rising Sun. Few of the Empire's mechanized units lacked some form of robotic upgrade, be it the Tsunami Tank's amphibiously adaptable treads or the Mecha Tengu's transformation abilities. The Empire also introduced the dreaded King Oni, a towering embodiment of robotic destruction, and used it to great effect during the war.

During a temporary ceasefire created to ensure a Commander-in-training's safety, the Empire is also instrumental in creating target drones - replicas of units from the arsenals used in the War of the Three Powers, including android infantry so lifelike down to the smallest molecular detail, one cannot help but admire the realism. 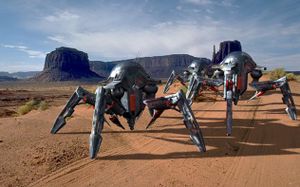 Perhaps the most well known of Soviet robotic units was the Terror Drone, a scuttling four legged mechanical spider that could quickly burrow inside of enemy tanks and tear them apart from the inside. These small metal menaces earned their name quite aptly during the first and second iterations of WWIII, being not only deadly to tanks but to infantry as well.

After Einstein's removal from the timeline at the hands of Soviet interlopers, the terror drone returned with some significant upgrades. Among these upgrades was a special energy beam that allowed it to temporarily incapacitate target vehicles, and the added ability to swim which made the drone as deadly to ships as it was to tanks.

Like the Allies, the Soviet Union modified their ore collectors to be run by AI programming to keep Yuri from mind controlling them.

The Soviet Union did not employ any other artificially programmed combat units during all iterations of the Third World War, though robotics did play a part in many of their tanks, including the mighty Apocalypse tank. 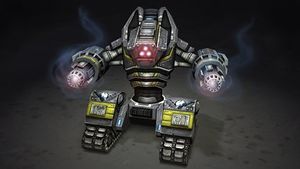 The Future Tank X-1, Futuretech's latest robot AFV, is proof that even the Allies can develop robots.

The Allies used Robot Tanks to counter the mind control abilities of Yuri's forces during the second iteration of the Third World War; the tanks were remote controlled from a special interface building which housed the artificial intelligence that guided them. These tanks proved extremely versatile due to their ability to hover above whatever surface they crossed over, allowing them to cross both land and sea with impunity. On top of this, the hover thrusters that kept the tanks aloft provided pressure sufficient to crush a man to pulp, granting the speedy and precise tanks the same infantry crushing power their manned counterparts had. Unfortunately, the tanks suffered from a major drawback; if their Control Center was destroyed or ceased to recieve power, they would be rendered inert and helpless. Only restoring the building's capabilities would return them to working order.

Allied ore collectors were later altered to be run by AIs during the second iteration of the Third World War in order to protect them from Yuri's mental manipulation.

During the third iteration of the Third World War, modernized Aircraft Carriers were known to carry and use 5 Sky Knight UCAVs. All Allied Production Centers, including War Factories, Airfields and Seaports, would have Repair Drones which repaireed nearby aircraft, ships and tanks.

The Future Tank X-1, Futuretech's then-latest military innovation and Robotic MBT, was the new Allied robot unit during the Uprising era, combining its own best expertise with the rugged durability and power of Soviet armor, and the advanced artificial intelligence (A.I.) found only in some of the Empire of the Rising Sun's forces. 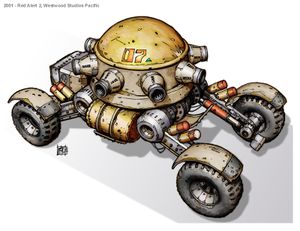 Yuri's own one-shot, but maddeningly effective, venture into Robotics, the Chaos Drone.

Even the psychic deviant Yuri developed robotics in the form of Chaos Drones - UCVs that use a hallucinatory gas that could make even the heaviest hostile tanks attack each other in simple psychotic rage. Thanks to Premier Cherdenko's interference to the timeline, this Robotic unit was erased from existence. 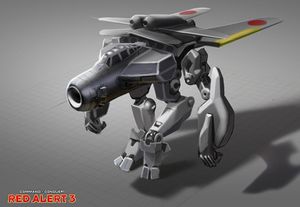 If there was an Assault Mech/Fighter Jet that showed the extent of superiorly advanced Imperial robotics, then the pilot-assisted Tengu was that unit.

The Empire of the Rising Sun of WWIII was unmatched in terms of robotics, pilot-assisted and AI-controlled - their King Onis, Burst Drones and the VX series were examples of this fact. 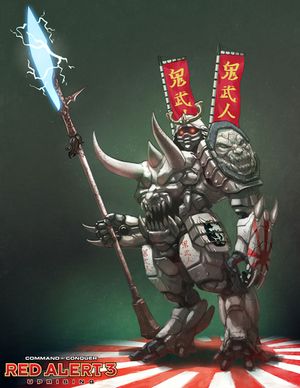 The Steel Ronin remains one of the most infamous robots of the Uprising.

The Uprising-era Steel Ronin was the latest and most current model of the Imperial Army's Mech force, and was a deadly close-quarters battle mech with its alledged Devil Suit- which was, in truth, a ceremonial punishment suit turned bloodthirsty powered armor. It was an anti-armor powered suit with a Wave-Force Naginata that couldn't be crushed easilly.

The crown jewel of Imperial robotics during the Uprising was, without a single shadow of a doubt, the Giga/Sky Fortress assault naval platform/anti-armor bomber, controlled by an advanced AI designed for their enemies' inevitable destruction, even if there were to be no fellow Imperials left to fight with. It was rigged with, in Giga mode, the most devastating plasma bombardment systems imaginable at the time and, in Sky mode, the God's Breath device, a super laser cannon capable of destroying practically anything it touched.