To the uninformed observer, the Empire of the Rising Sun appears to be deeply stratified along class and gender lines, leaving one to assume that such a regimented society would never deign to permit women to assume the mantle of warrior and engage in frontline combat. That assumption, however, could not be further from the truth. We now know that, --more than ten years ago, acting on the counsel of his forward-thinking son the Crown Prince, the Emperor Yoshiro saw fit to establish the Imperial Women's Warfare Academy deep in the heart of Hokkaido, with the goal of training the Empire's finest and fittest female subjects in both traditional and new ways of battle. Segregating the academy by gender was said to ensure proper focus and discipline. 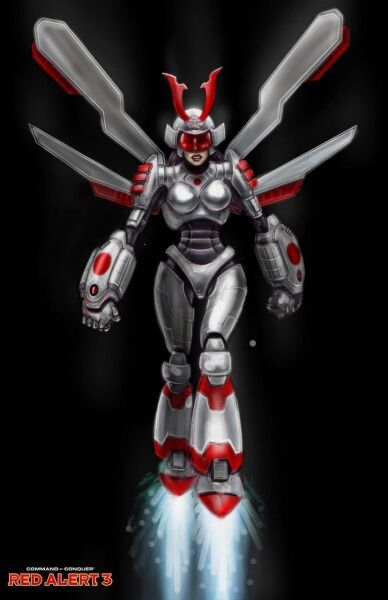 Formidable on any battlefield, Rocket Angels have proven more than capable enough to handily defeat even the most battle-hardened soldiers.

Although presented to the public as a return to the highly-trained female polearm cavalry of the Empire's storied past, this societal shift proved to be quite controversial amongst the Emperor's more-conservative subjects, with many families of note forbidding their daughters from taking up arms and enlisting (not that they necessarily would have been accepted into the IWWA anyhow). Expressing frustration at this publicly, Crown Prince Tatsu took it upon himself to intervene. Soon after, dissent was quelled and the ranks of the Academy began to swell with driven young women, eager to learn the ways of war.

As disapproval turned to fascination, legions of cynical journalists, inspired schoolgirls, and heartsick young men formed encampments around the Academy's impenetrable walls, waiting in the vain hope that they would catch brief glimpse of the women training within. Public expectations soon grew to a fever pitch, fuelled by the massively popular weekly manga series "Flying Girl Azami" and its accompanying television series. When, the public demanded, would the gates of the Academy finally open? When would the fruits of the Emperor's labor be revealed?

"Soon," was always the answer.

And after eight years, the doors of the Academy finally opened.

But what awaited the frenzied public proved to beyond anyone's expectations: These doors, it turned out, were on the Academy's roof.

The eager young girls who had entered the Academy so long ago now emerged as formidable women, battle-ready warriors armed to the teeth and trained within an inch of their lives--the Women's Elite Aerial Infantry Division, soon to be christened by an excited public as the "Rocket Angels." Instantly recognizable for their state-of-the-art, color-coordinated flying battlesuits, shoulder-mounted photon swarm-pods and the notorious "paralysis whip," these Angels soon proved to be anything but merciful.

Cutting a swathe across the battlefields of Europe, routing Allied Mirage Tanks and Soviet Bullfrogs alike, the Rocket Angels quickly gained a reputation for ferocious tenacity, descending from the skies in a shower of light and destruction, rending the Emperor's enemies asunder, and achieving victory even when the odds seemed stacked against them. In time, it became clear to Prince Tatsu that few wished to stand against his devastating progeny, and those that unwisely chose to do would quickly perish--and so the Prince of the Rising Sun stood vindicated, his Rocket Angels an unparalleled success.

Battlefield reconnaissance has revealed at least these facts about the Rocket Angels: