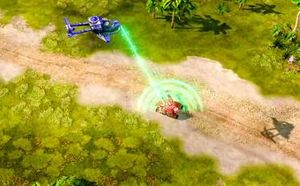 The S.H.R.I.N.K (Strong Homogenous Residual-Interactive Neutron Kinetic) Beam is an energy weapon used by the Allied Cryocopters to shrink any vehicle (including ships) into a tiny, crushable version (greatly increasing the speed of the targeted unit in the process). This weapon can only hit surface targets and it is used to shrink enemies, thus making it easier for other Allied units to destroy the unit. While it can't be used on structures themselves, it can be used on MCVs, and Imperial nanocores to make them smaller and deploy as a (temporarily) smaller structure. An interesting point is that once a unit has been shrunk, it speaks much faster and its voice becomes more high-pitched, much to the humour of both its enemies and allies. The Allies once shrunk down two MCVs at Leningrad to sneak past the Soviet tanks stationed there.

Note that even when a target is shrunk, the target can still cause damage to others (with a faster rate of fire but much reduced damage). Also, friendly units can be shrunk in order to make a quicker escape.

It is interesting to note that in one of the Commander's Challenges in Command & Conquer: Red Alert 3: Uprising, the effects of the beam were seen to be map-wide, affecting ALL units including infantry (but strangely however, not nanocores).

Shrink beams should only be used on the most dangerous ground or sea units especially apocalypse tanks, king onis, and any capital ships like the shogun battleships.