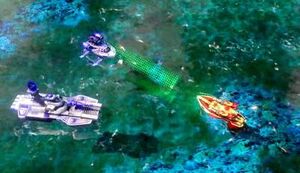 The Scramblegun weapon jammer is a weapon used by Allied Hydrofoils. It is capable of disabling enemy weapon systems by firing an electromagnetic beam. This weapon can also disable base defenses.

However, the weapon jammer can only target a single enemy unit at a time, and its range is limited, leaving it vulnerable against long-range artillery units. Though the Hydrofoil's mobility usually allows it to close the distance unharmed.