Surveillance footage of the Sea-Wing's primary and secondary combat functions

Doubtlessly one of the more impressive feats of Japanese engineering to date, the sea-wing is a stealthy submersible whose sealed hull and specially-designed locomotors let it rise up and out of the water in the form of an anti-surface strike craft. This makes it perhaps the most maneuverable craft in the Imperial military, which, considering the extreme mobility of many of Japan's fighting forces, is saying a lot. What's more, neither the Soviet nor Allied military possesses a counterpart to this type of never-before-seen dual-role craft. With the discovery of the sea-wing, it seems not even the seas are safe from the Empire of the Rising Sun's ambush forces. 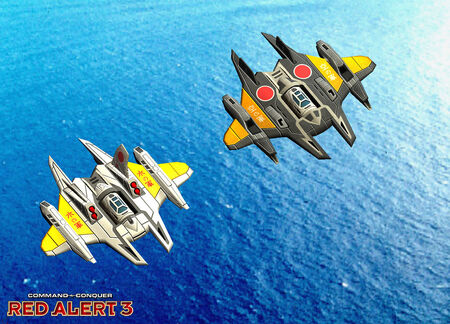 A gyroscopic cockpit prevents sea-wing pilots from tumbling upside-down when switching to sky-wing form. It is rumored that pilots prefer the skies to the seas, in general.

While lurking undersea, the sea-wing is nearly undetectable to scanners, and could almost be mistaken for a large mechanical devil ray. Once it has detected enemy aircraft, it surfaces to unleash a rapid seeking-rocket barrage against its foe. The rockets are disturbingly accurate even at range, and sea-wings seem to carry no shortage of them either. An entire top-ace squadron of Soviet MiG fighters once was decimated by a sea-wing patrol in only a matter of minutes.

While the MiG incident left Soviet air command in a state of near-panic, only later was the sea-wing connected to the sky-wing strike craft, which was previously assumed to be a completely different unit. In sky-wing form, the vehicle seems to use the propulsions from its rockets to help keep it aloft, while using a single swivel-mounted energy weapon to attack surface targets. The weapon causes intense burns, and has proven deadly against unarmored targets in particular--especially ones ill-equipped to take on a fast-moving aircraft like the sky-wing. 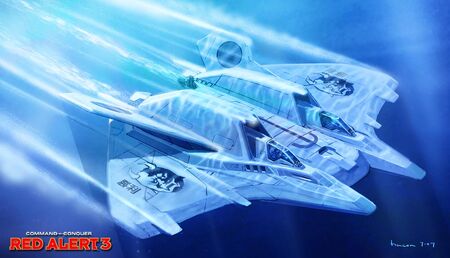 Because of its flight capability, the Sea-Wing is arguably the most versatile element in the Imperial navy. Pictured is the predecessor to the current model, which reportedly lacked flight capability yet required two pilots.

The way in which the sea-wing transitions to the sky-wing, and back again, is almost bizarre, in that the vehicle simply turns end over end like a coin-flip. How sea-wing pilots are able to withstand this, in addition to the G-forces of subsonic rises and submerges, is anyone's guess, though the cockpit of the vehicle is believed to be suspended in a sort of gyroscopic mounting. At any rate, piloting such a craft must take incredible skill, especially since the sea-wing's slender form means it is relatively fragile and dependent on its mobility for protection. The Empire of the Rising Sun, having a considerably smaller population than its rival world powers, must be training only the best of the best to commandeer these unusual vessels.

Battlefield reconnaissance has revealed at least these facts about the Sea-Wing: