Secure the Area is the first Nod mission in Tiberian Sun.[1]

Hassan is determined to stop you at any cost. He has pursued us back to a small base near his HQ. We must fend off his assault and build a Tiberium Refinery so we have the means to strike back.

After the First Tiberium War in part due to the apparent death of Kane, Nod's unity collapsed and the organization splintered, although the GDI were far too weak to take advantage of this in order to fully reconquer the lands Nod had gained during that war, particularly in Africa.

The resulting Nod splinter factions eventually coalesced under the control of General Hassan of Egypt. But General Hassan had a shameful secret, in return for allowing him to safely remain in charge of Egypt and the Brotherhood he would carefully limit the level of hostilities between Nod and GDI forces to within certain bounds acceptable to the GDI.

Even as Nod forces fought the GDI in many places believing General Hassan to be with them; he for his part had arranged that they would never actually win and in return GDI would never utterly crush Nod holdings. But some individuals power could not be contained so easily and one such individual was Anton Slavik, the leader of the Black Hand; somehow he would have to be removed.

He was sentenced to death for GDI espionage (an almost certainly false charge). The execution was to be carried out in public and transmitted via the Nod News Network to Nod followers worldwide. The method? Lethal injection (with a "100% toxin and no sedative" mixture).

The execution was proceeding smoothly until Slavik was suddenly liberated by a group of Anti-Hassan Nod rebels led by Slavik's future second-in-command, a female reporter known as Oxanna Kristos. After being transported to the Montauk, a subterranean Nod command vehicle, Slavik swiftly reassumed command after killing an American man who he believed had betrayed him to Hassan.

Acting on CABAL's advice, he had retreated to the main Black Hand base in the Sirte district of Libya to regroup and prepare to retaliate against the enemy.

Hassan's Elite Guard had been sent to finally kill Anton Slavik and Oxanna Kristos as part of a cover-up of the earlier incident. But they had underestimated the power of the Black Hand and the support that Anton Slavik had among them.

Running into laser turrets they had not expected to encounter the loyalist's advance was swiftly halted. Once inside the base Anton Slavik was able to gather a force of Nod rebels sufficient to eradicate all the loyalist elite guards sent to eliminate him.

The resources available to both sides in the battle were severely limited.  Probably due to Hassan's deliberate running down of the Black Hand's forces, the rebels raised were only able to be equipped as basic Light Infantry, yet the need to maintain the secrecy of the operation also limited the forces available to the loyalists, which never constructed a base of their own or deployed more powerful units. 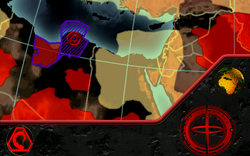 Breakdown of loyalist and rebel territory at start of the rebellion against General Hassan. (Loyalists are central yellow zone only, red is rebels, other yellow zones are GDI).

Having defeated the force of Elite Guards, Anton Slavik was able to swiftly secure Sirte and the surrounding area. Having done so, the news of his survival and escape spread quickly throughout North Africa and beyond.

North Africa and the Middle East soon rose up in revolt, with Nod forces in Libya, Algeria, Chad, Iraq, Syria, Iran and Saudi Arabia declaring in favour of Anton Slavik.

General Hassan was able however to remain in control of Egypt, Israel, Jordan and Lebanon as well as parts of Syria and Saudi Arabia. The First Nod Reunification War had begun.