Secure the Danube is the eleventh mission during GDI's European campaign in Tiberian Dawn.

As GDI forces advanced into Nod Hungary they advanced into the heart of an area afflicted with Tiberium sickness. Consequently they lost 60% of their numbers and the GDI advance came to a halt.

J.C. Carter had devised a cunning plan to prevent further losses, constructing gunboats along one of the tributaries of the River Danube he hoped to destroy Nod bases along the river. Specifically the one north of Budapest.

J.C. Carter himself had come down with Tiberium sickness and his delusional briefing to James Solomon referred to the river Danube as the river Tiber in Italy.

Despite this he was coherent enough to give James Solomon orders to destroy the Turrets along the river. James Solomon arrived with an MCV to the north of the river, established a base and began the destruction of the northern turrets while a Chinook moved a small force of Grenadiers and Rocket soldiers to destroy the turrets south of the river. J.C. Carter had hoped that James Solomon would have eliminated the Turrets so that his gunboats would arrive in the base and destroy it.

Nod however had preempted his plan. They had built one of their new defensive weapons, the Obelisk of Light which had been invented for the primary purpose of sinking enemy ships. Nod sank all the gunboats with its Obelisk of Light. J.C. Carter is believed to have died in the gunboats or to have been rendered insensible by Tiberium sickness before his death and was unable to give any new orders to James Solomon.

James Solomon took command of the situation, assembling a force sufficient to eliminate the Nod base the hard way and eliminate the Obelisk of Light. 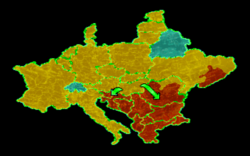 With the base destroyed the GDI were able to conquer Budapest, installing a GDI government there and having eliminated the Obelisk of Light, GDI gunboats were able to advance down-river the bombard Nod forces. GDI gained control of the Hungarian section of the River Danube and shortly afterwards Nod resistance in Hungary collapsed.

The Ways and Means Committee of the United Nations which had previously cut GDI funding following the Bialystok scandal had finally reversed it's earlier decision due to Mark Jamison Sheppard's diplomacy. As a result he was assume command over James' forces in Europe.

GDI forces in the south of Italy were victorious, eliminating the last Nod presence on Italian soil.

Meanwhile a powerful GDI counter-offensive from Poland routed Nod forces in Ukraine pushing them into a south-eastern pocket as they proceeded to push on into Nod Romania.