Secure the Region is the second mission in the GDI campaign of Tiberian Sun.[1]

The Nod forces that attacked Phoenix Base have been traced back to a small base in this sector. Orders received from GDI Command state that the Nod base must be destroyed. However, there is a significant civilian population in the immediate area that must be evacuated by ORCA Transport before the fighting gets too heavy. Before the Transports can safely land, all seven SAM sites must be destroyed. Once the civilians have been evacuated, the Nod base can be destroyed. 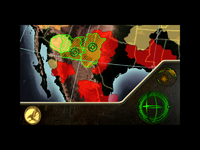 McNeil successfully drove Nod forces away from Phoenix base. Unfortunately, base commander Tao had already been captured, and GDI received a video transmission of Nod general Vega slitting his throat. General Solomon ordered McNeil to destroy the Nod base responsible for the attack on Phoenix and destroy the SAM sites around it to evacuate the civilians near the area by air.

Despite what the mission briefing says, you are not required to destroy the SAM sites before the Nod base. Since you do not have access to air units for this mission anyway, it is best to prioritize dealing with the Nod base.