Secure the river for the navy

Secure the river for the navy is the twelfth mission of Allied campaign in Red Alert 1.[1] 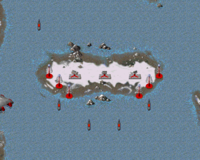 Soviet defenses in the middle of the river.

The atomic threat was too close for comfort. Fortunately, the Field Commander A9's team obtained Soviet documents telling that those missiles were the only ones that Stalin had readied to launch. The time had now come for the Allies to strike the USSR.

A Soviet bottleneck has been constructed near Volgograd in an attempt to prevent Allied vessels from passing through. The Allies are aware of this and have sent a small force with two MCVs to clear the river. The river itself is prowling with submarines, and will receive unlimited reinforcements from the north (most of the time they will be bugged, causing them to get stuck in between the screen). Friendly vessels will arrive from the South when the timer ends, which is approximately two hours. The mission is accomplished if at least one cruiser reaches the opposite end of the map. 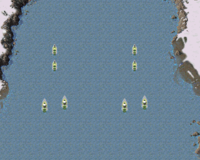 The two hour limit is easily achievable if you move at a relatively reasonable pace, but you certainatly don't need to rush or worry about it. You will start off with two MCVs for this mission. Only deploy one as you need the second for another base across the river. With plenty of credits starting out, you can build a quick aggressive force to hit the Soviet base to the north. The base itself will not send down too much in the way of attacks, a couple of Mammoth Tanks/V2s at once should be easy enough for your starting force of tanks to deal with, repairing them in-between assaults. Have some AA cover to defend against pesky Yak assaults. The best way to complete this mission is repeated hit and run Longbow raids on key Soviet structures. Focus on the Soviet base to the north first - build about 10 helipads and then rush the Construction Yard, SAM Sites, War Factories, Barracks and Ore Refineries in that order. With the Soviet base crippled, you now only have to worry about clearing the river, which is full of invisible Soviet Submarines. The bottleneck is located in the centre of the map loaded with several Tesla Coils and SAM Sites. If you've selected the bottom mission on the map, the island is in a different faction colour, where its power plants are located across the river. If you knock them out you'd have a considerably easier time to destroy the island.

With the island gone, it is now a simple case of building a Naval yard (multiple ones will help with speedy construction) and then building a fleet of Destroyers. When you have enough (about 10 should do it), move them slowly northwards and destroy every single submarine that you find.

With the river cleared, you can either wait for the timer to expire, or you can Longbow-rush the eastern Soviet base too if it hasn't been destroyed by now. The base at the start is not operational, but if you rush it early, you could capture the base before it becomes live. If you manage to wipe out every Soviet unit and structure before the timer expires (this is pretty easy to do), then the Allied convoy will show up immediately. Simply wait for the convoy to move up the river; when one Cruiser sails off the top of the map it's mission accomplished.