Seeds of Destruction is the second mission in the Nod campaign of Tiberian Sun: Firestorm.

The first step in our Tiberium evolution requires the fertilization of the land with new indigenous life forms. We will use this new life to educate those who wish to interfere with its progress. Locate and repair the bridge leading to the Genesis Pit before using the Toxin Soldiers to "persuade" the nearby civilians to aid us in our cause.

Anton Slavik reactivated CABAL and told him about the divided state of the Inner Circle. CABAL correctly predicted that General Marzaq was the one responsbile and suggested his removal, but Slavik refused, saying it was not the right time. CABAL told Slavik that Kane had his own plans before his disappearance, and that he must strike a blow against GDI. He suggested an attack on a GDI outpost near Colony 3. 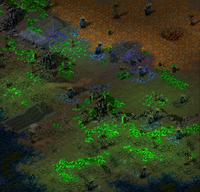 You start with six toxin soldiers, two cyborgs, three engineers, and three Subterranean APCs. Start by moving an engineer north, you will see a broken bridge that leads to the Genesis pit, repair it. Order the rest of your infantry into the APCs and move them west until you arrive at a civilian settlement. Attack them with your toxin soldiers, which will cause them to run to the Genesis pit and start luring Tiberium creatures.

When all the civlians are drugged, get your men back to the APC and move on. Take care to avoid GDI light infantry and Wolverines. If any of your units are attacked by GDI units, the mission will immediately fail. The next civilian settlement should be automatically revealed.

Bear in mind that you do not need to drug all of the civilians, you only need to lure enough Tiberium creatures to destroy the GDI base to the southwest. Once the Tiberium creatures are numerous enough to break through the base's perimeter, pack your infantry into the APCs and move them back to the starting location to prevent your forces from being caught in the crossfire. Once all GDI forces are destroyed by the creatures, the mission will complete.