Sheep's Clothing was a Nod operation against the Forgotten. In addition to capturing Tratos, Nod also scored a propaganda coup by pretending to be GDI.[1]

Control of the mutants is in our grasp. Their headquarters is located to the north of your drop-off position. The units you will need to implicate GDI in this deception can be obtained by capturing the rest of the GDI base that you will start in. Do not mar the Brotherhood's name any further. Allow the blame to fall squarely upon Solomon's shoulders.

﻿Having captured Umagon at either Provo or New Detroit; Slavik and Oxanna attempted to interrogate the mutant female about the whereabouts of the Tacitus but learned nothing. Umagon then managed to escape by attempting to kill herself, this forced the Nod guards to intervene at which point she overpowered them both and escaped her cell.

But since they had already attached a tracking device to her, Anton Slavik then actually allowed her to escape believing that she would lead them to where they wanted to go anyway and as was intended the tracking device pinpointed Slavik to the Forgotten Headquarters in southern Nevada near Las Vegas. Kane ordered Slavik to attack these Headquarters but was to use captured GDI weapons to disguise his forces as GDI.

The attack on the Las Vegas GDI base[edit | edit source]

A small GDI base was located in the immediate vicinity of the Forgotten headquarters. By capturing this base and attacking the mutants from it Nod would be able to carry out their plan to implicate GDI in the attack in the eyes of the Forgotten, and so allow the blame to fall squarely on General Solomon's shoulders.

As Nod forces advanced westwards, outmanoeuvring GDI positions in Arizona, CABAL was given command of a small Nod force and ordered to organize an attack on the GDI base near the Forgotten headquarters. He was however given strict instructions to capture its Barracks intact and was at that point to immediately transfer command to Anton Slavik.

CABAL's assault on the Las Vegas base had been a success and a Nod engineer had successfully gained control of the base's barracks. At this point as he had been ordered CABAL transferred command of his forces to Anton Slavik. A few GDI Light infantry remained defending the base at this point but without any production structures left standing they could not be reinforced and were quickly disposed of.

Most of the base had been destroyed, but a short distance to the north of the captured barracks its construction yard remained standing and was still under GDI control. Anton Slavik's initial objective was to gain control of this construction yard but there were no free Nod engineers left in the area to accomplish the task.

Anton Slavik solved the problem by using the captured GDI barracks to outfit new engineers and then used one of them to gain control of the construction yard. Having done this Anton Slavik was able to begin the construction of a replica GDI base designed to fool the Forgotten and the world into believing that the GDI would be responsible for the attack.

Anton Slavik began to use the replica GDI base that he had constructed to create a Nod force armed in the GDI manner and bearing GDI uniforms and colors. With them he intended to eventually storm the Forgotten base.

The Forgotten base was to the north-east, on the other side of the river. It was reasonably well defended and the Forgotten began to use a motley collection of old GDI Mammoth Mk. I tanks, more recent captured Nod vehicles and refitted civilian vehicles in an attempt to resist the apparent GDI assault and destroy their base.

Nod forces were able to prevail however, proving versatile enough to make effective use of their captured and replica GDI equipment. They crossed the river despite the unleashing of Tiberium fiends by the Forgotten against them and began to assault the Forgotten base itself.

Having broken through the Forgotten's defense, the Nod forces began to attack the Mutant Headquarters within the base. Tratos, the Forgotten leader chose to surrender at this point, hoping to save his own life and the lives of some of his own people by doing so.

Having recaptured Tratos, the Nod forces concluded their operations; abandoning their replica base, leaving the area en-masse while bearing the guise of GDI before scattering and casting off their captured and replica GDI equipment and uniforms so as to leave no clear evidence behind of their deceit.

It was in the hands of Tratos not Umagon that Nod finally found the object they had long sought, the Tacitus. Umagon had unwittingly led Nod to its location even though she had never actually held the Tacitus at all; the Tacitus had actually been removed by the Forgotten earlier from the bowls of the Alien warship as Nod forces approached the ruins of their old Sarajevo Temple of Nod. Ironically, since it had eventually ended up in the hands of their leader Tratos it was only by Nod's pursuing of Umagon to Tratos's location under the false assumption that she had the Tacitus that they actually acquired the real Tacitus.

﻿As was planned the GDI was widely blamed for the attack on the mutant headquarters and the news of the massacre was broadcasted around the world by the Nod News Network and Oxanna Kristos. In response General Solomon claimed on the official GDI news channel no responsibility and said that the mutants should trust GDI instead of Nod as they were allies. "Never say trust us to a mutant", Kane remarked privately to Anton Slavik and Oxanna Kristos.

While many rank and file mutants were deceived, the Forgotten leadership were not. Had not the GDI earlier rescued Tratos? And Umagon was still at liberty and she hadn't forgotten her earlier capture by Nod. The Forgotten opted to feign alliance with Nod and in the process deceive them. 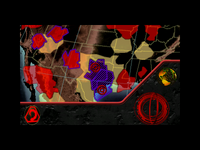 As a result of his new 'alliance' with the mutants Kane received intel that GDI had been developing a cure for Tiberium mutation, putting Kane's Divination plans seemingly into potential jeopardy. Though Oxanna Kristos was skeptical, Anton Slavik was still sent to destroy the GDI research facility, making use of their new mutant 'allies'.

Nod forces occupied Las Vegas and proceeded to swiftly overrun the GDI military zone covering northern California and Nevada thus gaining control of both States. On other fronts Nod forces also made modest gains. Nod forces in north-western Mexico which had withstood the earlier GDI invasion and occupation of Mexico were able to push back the besieging GDI forces, advancing south into their territory. Nod also made gains to the north-east in Missouri and Indiana.

The GDI research facility that was apparently researching this Tiberium anti-mutagen was located in Texas. Nod forces had been driven out of Texas during the early part of the Second Tiberium War and it was now securely under the control of a large GDI military zone. With the remaining GDI forces in Arizona pinned down and threatened by two adjacent Nod military zones, Nod forces were now free to mass in New Mexico and launch an offensive on Texas.

A direct assault would allow them to gain control of some bio-toxin trucks that they had been force to abandon when they had been driven out of Texas earlier in the war and use them to manufacture a powerful missile to aid their assault on the research facility. But they could reach the facility quicker if they instead used their New Mexico forces as part of a feint to draw away the GDI forces in Texas while they actually advanced on the facility from neighbouring Louisiana.