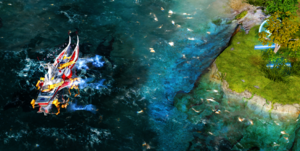 Shirada Cannons are the primary weapons of the Empire of the Rising Sun's Shogun Battleship and Giga Fortress. Created by Shirada Shipworks, a major Imperial zaibatsu responsible for the development of most of the Empire's naval vessels, the Shirada Cannons are extremely powerful naval guns, possibly the most advanced of its kind. They fire superheated slugs, capable of devastating enemy vessels and structures, and have a remarkable rate of fire.

The Shirada Shipworks attempted to create a land version of the Shirada Cannons to compete with Kanegawa Industries' Wave-Force Artillery. However, a string of accidents with the prototype, supposedly due to calibration errors, crippled Shirada's effort and soon afterwards the Wave-Force Artillery went into full production. Though later investigation implies that Kanegawa may have sabotaged the Shirada prototype.