Shock Therapy is a Command & Conquer: Red Alert 3 mod that aims to improve, fix, and add what Red Alert 3 missed, forgot, or was unable to do in the dev team's opinion. 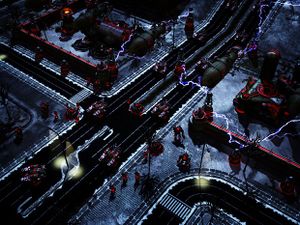 So far, all the units from Uprising and some campaign only units have been enabled for use in skirmish and campaign play. These units include the Grinder, the Harbinger gunship, the Tesla tank, the Greater King Oni and the Giga-Fortress. There's also a functioning Chrono tank, previously only seen in concept art.

It is possible to upgrade Allied power plants to produce more power like the Cold fusion reactor from Generals. In addition, the Soviets get an ICBM. Special abilities for the Allies and the Empire are planned. There are also many graphical changes which aim to make the game look darker.

The latest version is 1.011, and is fully compatible with the original Red Alert 3 campaign (although bugs may be found).