The Shogun Executioner is an enormous assault walker developed by the Empire of the Rising Sun for the War of the Three Powers, and it is also probably the most powerful unit in the game.

The walker's upper body pivots on the tripedal base. Each blade is wielded by a separate torso on the upper body. Operations against the Soviet Union were a consideration in the design; the Executioner feeds on high-voltage electricity from Tesla based weapons (such as Tesla Tanks, Tesla Coils and Stingrays) to repair and recharge itself, however it has a constant vulnerability to aircraft and air-to-ground weapons.

The three large blades are more than sufficient to eliminate ground targets lesser than itself (even tier 3 armor units can't take more than 3 hits). Amusingly, the swords actually have a longer range than direct-fire units. While nowhere nearly as long-ranged as artillery units, it can destroy Super Reactors without getting caught in the explosion. In addition it may simultaneously drive the blades into the ground to release an electric shockwave; this is usually sufficient to destroy even structures in the surrounding area. The Executioner has no anti-air weaponry but is a hazard to low-flying aircraft due to its height. The walker may also wade through water and walk over/on buildings.

Its destructive power is matched by its armor. A lone Executioner is only threatened by mobile artillery, like V4 Rocket Launchers, assuming the artillery constantly relocated to avoid the oncoming walker. Another important observation was its inability to target multiple targets at once, and its slow attack speed, which the Terror Drone swarms have revealed and exploited this weakness. Also, the Executioner can be shrunk and then frozen by several Cryocopters, leaving it vulnerable. 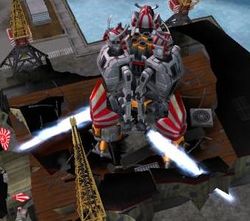 The completed walker in Odessa

The development of the Shogun Executioner was completed as the Empire invaded the Soviet Union. An example was transported disassembled to the front at Odessa. The final leg of the journey was by a Sudden Transport naval convoy. Responsibility for providing protection for the convoy and its assembly at a local warehouse fell to a recently promoted shogun, who also oversaw its use once it became operational. The Executioner helped destroy the city's artillery emplacements allowing Imperial forces to establish a foothold and drive the Soviets out of the surrounding area.

The Executioner was sent toward Moscow as the war against the Soviet Union neared its end. The assault on the capital was already in progress when the walker arrived by river. With the aid of the Executioner, Imperial forces advanced on the Kremlin and destroyed the Soviet time machine. The Soviet Union fell shortly thereafter.

The Shogun Executioner is seen in King of the Monsters (whether or not it is the same one from the Empire campaign is unknown), a side challenge mission of Commander's Challenge Mode. It's defending a small island and attacks all factions indiscriminately.

However, the Shogun Executioner in Command & Conquer: Red Alert 3: Uprising has an armour counter unlike the former, which has more armor than the former.

The Executioner is vulnerable to Terror Drones and air attacks.

The game model is not visually synonymous with its CGI appearance. The game model is more cubic in design and lacks the shoulder and forearm armour. It is also comically missing some teeth.

The Shogun Executioner has the ability to heal when receiving fire from Tesla weaponry.

Although the Executioner is tall enough to slash aircraft, it must still walk up to them to destroy them. The reason behind this is unknown, though it is presumably for balance reasons to avoid making the unit too overpowered.

It's unknown why the Shogun Executioner can destroy a Giga Fortress with one touch, but can't destroy Kirov Airships.

The Shogun Executioner has "ears" that might appear to be missile pods or vice versa.