The Shore Defense Cannon is an uncommon defensive installation used by the Brotherhood of Nod, resembling a larger, more powerful variant of the Nod Turret. It fires large shells at enemy ships, particularly GDI Gunboats. It has its own internal command room, and is typically defended by nearby SAM sites. The Cannon is indestructible to small arms fire, and appears impervious to gunboat fire as well. The most convenient way to take one down is to call in an Orca airstrike, which would require clearing out nearby SAM sites first. A GS-2 beacon can also be used to call down an ion cannon strike, which is amply sufficient to destroy the installation with a direct hit. 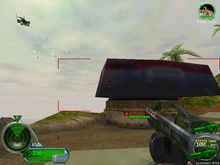