Sick and Dying is the seventh Nod mission in Tiberian Dawn.[1]

The government of Gabon while it was one of the two or three African governments that initially declared in favour of Nod at the beginning of their African Campaign; had following the fall of the more powerful neighbouring Nod aligned Cameroon to GDI forces, attempted to save itself by withdrawing from Nod and declaring itself neutral. But under pressure from the nearby GDI forces, Gabon's government would soon declare itself GDI.

But large fields of Tiberium had grown unchecked in Gabon and Cameroon, Kane had taken a personal interest in harvesting these fields. There was a problem however, in each of the countries a village had come down with Tiberium sickness. Believing Tiberium sickness to be contagious and fearing a regional epidemic that could infect Nod extraction workers, Seth sent some forces to 'take care' of the problem of these villages.

Seth had taken a disliking to one of his subordinate commanders, whose successes against GDI were causing Kane to favour him, and who Seth now viewed as a competitor. In the mission briefing Seth intentionally lied, claiming that the villages were barely defended. In reality, they were in the vicinity of GDI bases which had been built to secure the area and protect some hospitals that the GDI had built to treat the infected.

However, it is ambiguous whether the Commander in question was sent to this battle or to a concurrent false flag operation in the Central African Republic. If the latter, it is unclear whether Seth attempted to deceive the other commanders.

Regardless, the outcome was a clear Nod victory. Nod troops destroyed the village, the hospital and the GDI base. The infected villages were killed in the very hospital beds that the GDI had given them and just to make sure Nod forces had massacred even the apparently healthy villagers. 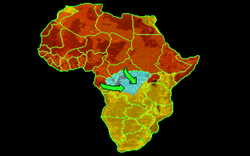 With Gabon and Cameroon secure Nod forces were able to advance on Zaire.

With the Commander truly becoming Kane's favourite at Seth's expense, Seth planned to dispose of him once and for all with a completely suicidal assault on the Pentagon. However, Kane executed him before this attack could be carried out.

Having apparently stalled the threat of Tiberium sickness epidemics, Nod forces would create enormous Tiberium mining centres at Bertoua and Koula-Moutou.  Enriched by these nearby huge Tiberium fields Nod forces would swiftly destroy the occupying GDI forces in Cameroon and Gabon, restoring Nod rule over these countries.