Surveillance footage of the Sickle's primary and secondary functions

Originally designed as a police vehicle for use in fringe-republics noted for their "heightened" risk of revolt, the Soviet Union's KDB-5 Sickle has a compact form factor, four durable steel stilt-legs, and three articulated gunnery positions that make it ideal for urban operations and crowd control. It exceeded expectations in its original role, becoming a mainstay in Soviet mechanized armor divisions while escalating the Ukraine's Kazminov Design Bureau to the upper echelons of the Soviet Union's weapons manufacturers. 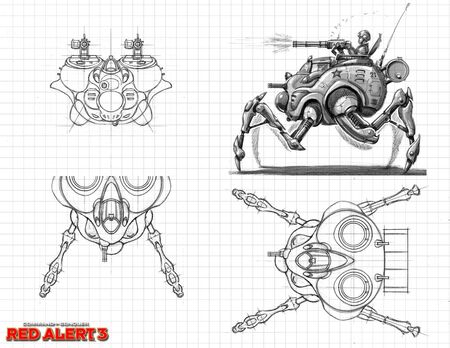 Three hundred and sixty degrees of firepower, in addition to an exotic form factor, make the KDB-9 Sickle one of the more popular Soviet military vehicles in use today.

The Sickle's dramatic spiderlike shape--clearly a response to Sversky Robot Works' infamous "Terror Drone" remote-operated military scout created almost a decade prior--quickly deterred crime in some areas. However, occasionally the Sickle had the opposite effect, provoking an already-disrespectful and ungrateful populace into full-on riots and street fighting. It was through several of these incidents that the Soviet military took notice of the vehicle, for it managed to cut down a staggering number of traitorous men, women, and children in record time. (How foolish they were to poke fun at the Sickle!) In spite of the spindly look of the vehicle, it proved stable and fast enough to allow its three machine gunners a near-perfect vantage point for silencing enemy combatants.

The militarized version of the Sickle features a much sturdier, reinforced leg design that allows the entire vehicle to leap long distances, sending it clear over obstacles such as roadblocks or traffic intersections. The maneuver was intended only to provide these types of tactical advantages, though Soviet authorities have conceded that the Sickle's ability to "flea jump", as Sickle gunners affectionately refer to the technique, has increasingly been used for recreational purposes. Appropriate punishment is still being vetted in military courts, though for now, all Sickles in the field have been hard-coded with a strict limit on how frequently the jump maneuver may be used. 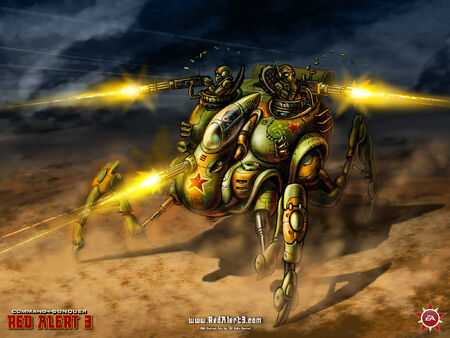 Shown here is an earlier model whose flank gunnery positions were vulnerable to return fire. In addition to its omni-directional weaponry, the Sickle's ability to leap long distances make it as unpredictable as it is effective.

Some concerns abound about the Sickle, despite its patriotic name and purpose. From interviews and ongoing psychological profiling, it is becoming apparent that Sickle gunners--typically three once-normal young men per vehicle--are fully twice as prone to acts of sadism, excess, or disregard for authority than the average Soviet conscript. This perhaps explains that the average life expectancy of Sickle gunners is but 31.8 years. In spite of repeated safety video screenings, operators of these vehicles seem unable to help themselves from engaging in senseless acts of violence or self-endangerment. At any rate, the Soviet Union continues to use Sickles extensively as part of its military operations, and citizens continue to volunteer by the throng for a chance to drive one.

Battlefield reconnaissance has revealed at least these facts about the Sickle: