Although Sarajevo had been secured by GDI since the close of the First Tiberium War, cutbacks following the Firestorm Crisis had led to military personnel being removed from Eastern Europe, allowing Nod's influence to take root once again. At Sarajevo, an abnormally massive and durable Nod Temple; Temple Prime, was constructed atop the ruins of the original Temple of Nod that had been Kane's command center at the end of the First Tiberium War. Command centers similar in architecture to Temple Prime had been set up in other Nod strongholds, such as Ayers Rock.

The construction of this Temple progressed at an astounding rate, and with utmost secrecy. Temple Prime was completed shortly before the Third Tiberium War, and is where Kane ordered a legendary commander to attack Goddard Space Center. Following the opening stages of the war, Kane ordered the components for a Liquid Tiberium Bomb, held at labs worldwide, to be shipped to Sarajevo for construction. Shortly after the destruction of Nod's WMDs in Egypt, GDI learned of Temple Prime, and immediately began advancing into Eastern Europe. Kane called all Nod reinforcements, including those being sent to aid Kilian Qatar, back to Temple Prime.

GDI advanced from the south, as a large Tiberium Glacier had grown north of Sarajevo, forming an impassable boundary. A large force besieged the Temple, hoping to stop the transit of the remaining Liquid Tiberium Bomb components. However, a brilliant Nod commander, after retrieving the last of the components from Slovenia, managed to slip the cargo past GDI patrols. The Commander was then put in charge of all the resources and defenses of Temple Prime. Nod and GDI forces battled inconclusively for a while, until the Nod reinforcements arrived and bombed the GDI base; leveling it.

GDI's General Granger would later remark that far too many assets were wasted attempting the original assault on the Temple (the existence of the Temple was still not confirmed to the GDI public during that phase, however) but Redmond Boyle expressed the need for a renewed attack.

Before the Temple's defenders could celebrate, the new arrivals set up two bases to the Southeast and Southwest, and began to demand the surrender of Temple Prime. Intelligence officer Ajay had suspected that Kilian Qatar was behind this. The Commander, a Kane loyalist, dug in and prepared to kill his own brothers. After a difficult battle, all of the infidel Nod forces were exterminated. Kane had not yet understood who were the traitors, and ordered the Insurgent to join General Qatar in Australia. The Commander was to 'salvage what he could' from Kilian's forces.

Recent intelligence suggests that rather than General Qatar ordering the attack, the AI LEGION, under command of Alexa Kovacs struck Temple Prime. This was done to discredit General Qatar, whom Kovacs distrusted. LEGION also had a Saboteur steal the design data for the Ion disruption towers in order to further discredit Qatar. With the help of a commando, the Saboteur hijacked an Attack bike and escaped Temple Prime with the plans. This was later made clear to Kane too, but not before he had General Qatar executed for a crime she didn't commit.

Following the initial failure at Temple Prime, GDI attempted to mount successive attacks; however, casualties were high, and Temple Prime was now more fortified than ever, its walls brimming with immense firepower. Assembling troops composed of GDI's proudest (including as well Mutant mercenaries), the Commander directed a vast assault against Kane's lieutenants. GDI attempted to use the Ion Cannon, which had just come back online, in order to destroy Temple Prime as its predecessor had done at the final stage of the First Tiberium War, but Nod had constructed special Ion Disruption Towers, which made hitting Temple Prime with an Ion Beam impossible.

To General Jack Granger's dismay, GDI Director Redmond Boyle was set on defeating Nod at the Temple, in order to rally the press. Fresh from the destruction of Nod's Cairo ICBM facility, GDI's best field commander was sent to Eastern Europe. After pushing through Croatia and destroying Nod stockpiles in Albania, he reached Sarajevo several days after his Nod counterpart had made his escape. The Commander was tasked with capturing Temple Prime before the Liquid Tiberium Bomb could be used.

Setting up his base, the Commander began a long, costly battle against the entrenched Brotherhood members including attacks from Black hand, Vertigo bombers and venoms and finally avatars.

The dogfight over Sarajevo[edit | edit source]

The FireHawks encountered a group of Venoms escorting the Vertigos to destroy the GDI Base. The Firehawks let loose their missiles at the Nod Air Force and the Venoms went down while the Vertigo Bombers were destroyed by more Firehawk missiles.

As the GDI forces entrenched themselves upon the outskirts of Temple Prime, the Nod forces found it extremely difficult to dislodge the GDI besiegers. The GDI Commander and his advancing troops pushed back the enemy and Kane himself contacted his foe adressing him empty threats but with harsh anger. Nonetheless, GDI's determination paid well. Eventually, however, the GDI forces sent out a Mammoth Tank attack group to punch through the multiple Obelisks of Light. The terrific damage inflicted by the feared obelisk somewhat shook up the Mammoth Tanks, and called in fire support in the form of Juggernauts. After smashing through the base defenses, the Mammoths faced down the massive amounts of Nod forces sent against them. Breaking through the other Obelisks, defenses, Ion Disruption fields, determined Nod soldiers and putting down a few Avatar Warmechs with the aid of the attached Commando, the Mammoths surrounded Temple Prime with the intent to wait until Kane gets out of Temple Prime.

Despite Temple Prime's defenses,the Commander managed to breach the giant citadel walls of the Temple, allowing his army to begin destroying Nod's Ion Disruptors. As GDI forces slowly pushed through Temple Prime's defenses, Nod forces gambled on a desperate ace-in-the-hole. A smaller temple nearby Temple Prime began fueling a tactical Nuclear warhead; the last of Nod's Nuclear weapons. The GDI commander managed to destroy the launch facility, along with the final Ion Disruptor and an Avatar Warmech. The GDI Commander crushed all resistance. As GDI forces prepared to dig in to force Kane out of Temple Prime's main building, new orders arrived. Against the advice of General Granger, Director Boyle ordered the use of the Ion Cannon. General Granger however aware of the disaster it would cause commanded an evacuation of the Commander's forces to avoid high losses. Many were evacuated but most of the GDI entire force was depleted. Nod forces could only pray for deliverance as the orbital weapon moved into position and prepare to fire its laser. 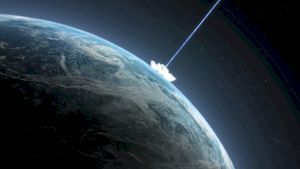 The ion cannon tore through the main building, eliminating it. However, it also detonated Kane's liquid Tiberium device. The blast yield was roughly 2 gigatons, sending massive amounts of lethal radiation into the air. Even miles away, Tiberium crystals began exploding. Within minutes, nearly all of yellow zone Y-1, once the hub of Nod activity, was wiped out. Millions of civilians, GDI, and Nod forces died.

Southeastern Europe has since been recategorized as part of red zone R-1.

Initially, though the cost was enormous, GDI leaders, especially Director Boyle, considered the battle a victory. Kane's reign of terror had once again appeared to be over, and one of Nod's most important territories was a Red Zone wasteland.

Nod forces across the world were dismayed. Kilian Qatar had proclaimed herself in command of Nod; many senior officers cynically noted that the destruction of Sarajevo seemed to benefit her, though most grudgingly accepted Kane's earlier judgment.

However, the blast had an effect that nobody could have foreseen; humanity made its first contact with an alien species. This did not go well, as the Scrin immediately started aggressive action against both GDI and Nod, pushing military forces around the world to the brink of destruction and wreaking havoc on unprepared civilians.

In the end, what transpired at Temple Prime was revealed to have been the deliberate plan of one man; Kane. He had presumably escaped Temple Prime and went into hiding although recent reports suggest a duplicate of Kane remained behind to eliminate the GDI Commander since the real Kane was not at Temple Prime when the Ion Cannon fired. Sometime after the debacle, Kilian Qatar allied with GDI to fight the Scrin, he revealed himself. After the Commander destroyed the GDI presence in Australia with stolen nuclear missiles and captured Qatar's command center at Ayers Rock, Kane had Kilian executed for the alleged role she played at the Temple Insurrection. He revealed to the Commander, his new second-in-command, that Temple Prime was bait. He never intended for Nod to defeat GDI, he simply needed to provoke them. From the Tacitus, Kane knew a Liquid Tiberium Explosion would lure the Scrin to Earth; however, Nod lacked any detonator powerful enough to trigger the necessary blast. The opening of the War was merely to goad GDI to use the Ion Cannon on Temple Prime, as it was the only weapon the Inner Circle theorized would suffice. With the Scrin on Earth, the final stage of his plan began, and he sent his commander to Italy, on a campaign to capture a Scrin Threshold Tower and the "key" to one of those towers. Despite Kane's manipulative plot unfold as he planned he lost more than he bargained with. Many of his "loyal" troops were killed and the Nod Insurgency proved to have been a setup. It is proven that Kane the self-Messiah would not have temporary lost had it not been for Alexa Kovacs who poisoned LEGION. Temple Prime turned out to be a costly, yet somewhat satisfactory plan.

GDI's assault is similar to the previous First and Second Tiberium Wars. GDI assaults Sarajevo and have at their disposal an Ion Cannon as in the First War. They also have mutant soldiers and MK tanks reminiscent of the Second War.

The Laser and SAM turrets onto the walls of Temple Prime are heavily augmented, firing at at least triple the rate of fire from their normal counterparts. If the GDI Commander manages to capture a Nod construction yard, he will too be building these unique defenses, regardless of being near Temple Prime's walls or not. However, Obelisks of Light and Shredder Turrets are not affected.