Small Town USA is a two-player map where two teams fight for each other and establish a large base of operations to defeat the enemy. In the middle of it is a city, where buildings can be occupied by friendly or enemy troops situated to make urban combat inside the city and from the tower in the middle of the city square. 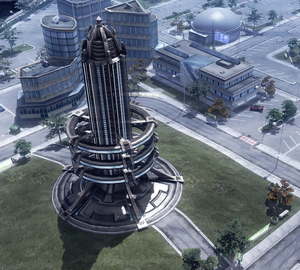 A large tower seen in the middle of the map

Both teams start at each side of the map with fewer Tiberium fields and some Tiberium spikes adjacent to the starting locations.

This is the only playable skirmish map in the Tiberium Wars demo.