The world got its first view of the new Soviet Mobile Construction Vehicle in the aftermath of a devastating earthquake near the small hamlet of Smedznegorsk, Ukraine. Aid organizations and media crews broadcast images of an immense vehicle and its incongruously small crew distributing prefabricated building components to the residents of Smedznegorsk. With thousands left homeless and quickly-darkening clouds on the horizon heralding the approach of a massive ice storm, initial coverage of the government aid effort began suggesting that it may have been too little, too late. Cameras continued rolling in front of speechless reporters as, moments later, a miniature city sprung to life from the wreckage. The structures themselves were grey, drab, and cookie-cutter, but they were warm and dry, a welcome replacement for the piles of rubble that were formerly homes and businesses. 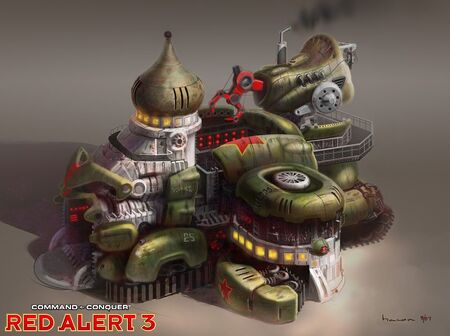 Soviet troops often refer to the Construction Yard as "Little Basil" because of architectural similarities to St. Basil's Cathedral.

Soon MCVs were seen across the periphery of the Soviet Union, spurring the economy in even the poorest areas of the Union. Although obviously modeled after the Allied MCV, the Soviet Union insisted that their new vehicle was designed purely for internal reconstruction efforts, pointing to numerous investigative reports showcasing the use of the MCV in the field. Manned by civilians, Soviet MCVs appeared to be operating completely without military support and apparently lacking any sort of automated construction capability. In light of this coverage, the vehicles seemed poorly suited to military ventures. Since the Soviet military seemed to be continuing to use traditional base-building methods, many media outlets began to openly doubt that the Soviet MCV had any military utility at all.

This was dramatically disproven during one of the opening conflicts of the current war. During the uprising in the ancient Central Asian city of Samarkand, Allied observation planes captured footage of a Soviet MCV, which had been rebuilding a nearby province, quickly pack up all modules and civilian workers and veer outside of the reconstruction zone. In a devastating surprise offensive, Soviet forces appeared several days later from an entrenched firebase a short ways to the North, successfully aiding the civilian uprising and pushing the Allied presence out of Samarkand. Their secret revealed, the fleet of Soviet MCVs sprung into action. Almost overnight, a constellation of military bases sprung up around the world - each centered around and created by an MCV - spawning the first wave of Soviet forces to threaten to overwhelm the Allies. 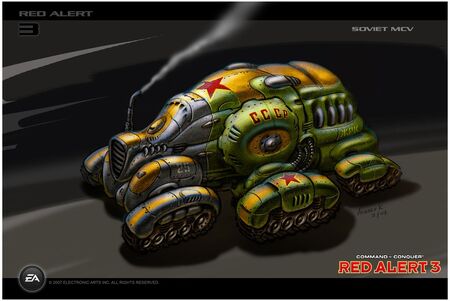 While their discipline is lax by military standards, the civilian MCV crews are dedicated and patriotic.

The Soviet MCV has since become an iconic figure of the people's uprising. When not engaged in combat operations, the vehicles and crews continue to serve communities destroyed by the ongoing conflict, and the grey monolithic structures first seen in Smedznegorsk now shelter countless numbers of the displaced and homeless. With each village rebuilt, the Soviet army is bolstered by the impassioned and the disenfranchised, often leaving each area with another full complement of trained workers. The MCV crews remain civilian and have little difficulty shifting back and forth between their roles, working alongside military personnel to build a new base one day, and the next day rebuilding a civilian school. Like the military conflict, the battle for the loyalty and sympathies of the civilian population rages on, and the crews of the MCVs are on the front line in both fights.