The Soviet Union's nearly unaccountable military spending required the nation to rapidly fill its coffers with resources that could be directly applied to production. Therefore, fleets of vehicles known simply as ore collectors became a common sight in resource-rich areas. Some say the modern ore collector symbolizes many aspects of Soviet ideology (excluding an obsession with heavy ordnance): After all, each ore collector is dutifully assembled by loyal Soviet men, women, and children from recycled parts taken from other Soviet vehicles expended in battle. In that sense, each ore collector represents the pride and indomitable steadfastness of the Soviet spirit, in spite of being relegated to the rather thankless and monotonous task of transferring volumes of ore between mines and nearby refineries. 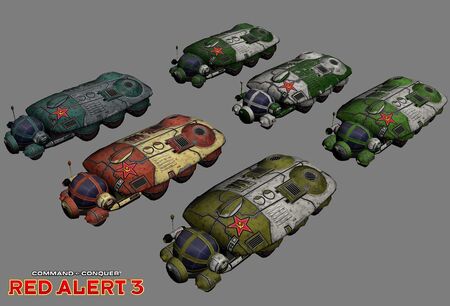 Soviet ore collectors were military vehicles in a former life. Now, they are relegated to the important yet unenviable task of schlepping large volumes of valuable ore across short distances.

One can barely begin to imagine the hodgepodge of spare parts from other vehicles used to assemble each ore collector: Their cockpits are based on the same bubble canopies used in flak towers and in Kazminov Design Bureau's own KDB-2 Bullfrog transports; their collapsible pontoons are taken from resold Sputnik exploration vehicles; their reactive-armor coats are composed of sheeted alloys smelted from Hammer- and Apocalypse-class main battle tanks; their cargo bins are made from the recycled fuselages of downed MiG fighters, and so on. Each ore collector is machine-crafted with great care, and each collector's designated driver is given a framed, commemorative list of names and addresses of all the loyal soldiers whose vehicle parts were used to create that particular unit. Ironically, in spite of the rather conservative original design principle behind the ore collector, each one turns out to be fairly costly to manufacture, in part because of all the formality and ceremony around the respectful use of recycled vehicle parts. 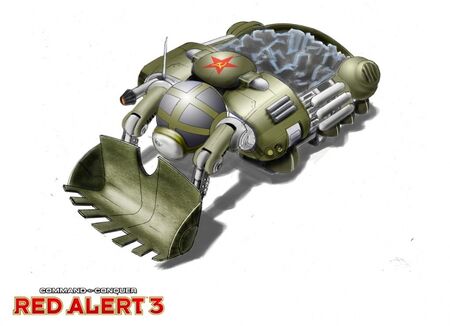 Allied military officials have blasted the "deceptively cute" form factor of the Soviet ore collector as a failed ploy to prevent these vehicles from coming to harm in combat situations.

Collectors are unarmed to keep costs down and to meet the minimum standard for having civilian drivers--men committed to the Communist cause but, for various reasons, unable to fight on the front lines like their braver or more-self-sacrificing comrades. The Soviet Union created an expensive and elaborate publicity campaign that brought in collector drivers by the thousands from the swelling ranks of Soviet patriots, promising that volunteer drivers would not be incarcerated for thought-crimes against the Soviet leadership for not enlisting in military services. These drivers were assured their personal safety as well, due to the ore collector's ability to deploy full-body reactor armor plating that easily withstood 70mm tank shells during tests. Individuals particularly gifted in mathematics were given the cushiest ore-collection posts, where they could readily apply their skills to tabulating massive sums of the resources they themselves would bring in for the good of their countries. This gave these men some legitimate work to do on the job, in between occasionally having to defend themselves from Allied counteroffensives.

One outspoken critic of the Soviet Union's military engagements once drafted an infamous 17-page paper entitled "On the Idiocy of Over-Dependence on Ore Collection", in which he lambasted the Union's strategy in using spare vehicle parts to create ore collector vehicles, as opposed to new military vehicles. He resolved to expose the connection between ore refinement and military production, but unfortunately died of natural causes before delivering on this promise. At any rate, ore collectors continue to be a fixture on Soviet front lines.

Battlefield reconnaissance has revealed at least these facts about the Ore Collector: