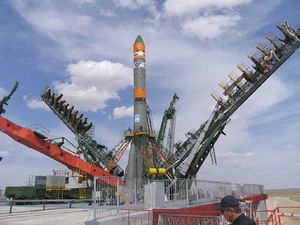 The Soyuz rocket was a Soviet/Russian space launch vehicle. The first version entered service in 1966 and improved versions continued to launch in the 21st century. Payload can include manned vehicles, satellites, and military ordnance.

During the GLA War, the GLA captured Baikonur Cosmodrome and a supply of Soyuz rockets. A rocket on the launch pad was loaded with bio-chemical weapons and launched against a city with deadly effect.

Even after their defeat at Akmola, the GLA continued to hold Baikonur. Another Soyuz with bio-chemical weapons was launched at a US military base in Northern Europe. The GLA planned to follow up with another launch but the train delivering the next rocket was captured by US forces and used to infiltrate the Cosmodrome. The GLA were removed from the launch site and the launch aborted.