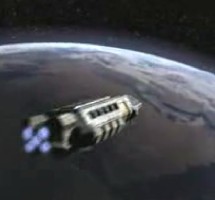 Since its inception, one of GDI's greatest strengths was developing space-based assets that could support their forces. Backed by the United Nations and the major G8 nations, the new military alliance had the financial and scientific resources for space exploration and its military applications. During the First Tiberium War, GDI placed in orbit Ion cannon satellites, which allowed for precision strikes around the world.

With the deterioration of the environment due to Tiberium, GDI began to further their endeavors into space. By the Second Tiberium War, its greatest achievement was constructing the GDSS Philadelphia. To increase its mobility, GDI developed technologies to insert forces directly from orbit, such as the drop pod and special Orca Dropship orbital engine technologies. 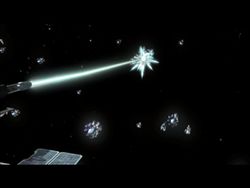 At the end of the Firestorm crisis, GDI developed its space based technology even further. By 2047 the Philadelphia was upgraded, and the construction of new space stations and orbital platforms was already completed. Ion cannons and other orbital platforms formed a complex anti-satellite and anti-missile defense network, which could be used to defend against spaceborne threats, as was the case during the Scrin invasion. Orbital strikes provided more ground support capabilities from space. On the ground, front line bases could build space command uplinks for access to space based tactical support.

However there was one flaw that almost finished GDI. GDI's ASAT/ABM defense network all depended on a sophisticated computer system located at Goddard Space Center. When Goddard fell, the defense system unable to stop Nod's attack on the Philadelphia, and subsequently, any of Nod's nuclear weapons launched on the battlefield. W3N reporters found that the computers and communications for the ASAT/ABM network could have been better protected if relocated in orbit. However, GDI administrators decided against it due to costs.

It is worth noting that GDI managed to maintain their space superiority even against the extraterrestrial Scrin who must have had superior space faring technology to be able to traverse interplanetary distances (at least) however this was largely thanks to GDI's Ion Cannon Network which had first strikes against the Scrin Drone Ships. However, it should also be noted that the Scrin encountered were not expecting any resistance (having expected the "indigenous population" to be extinct or nearly extinct) and were unlikely to have made preparations for an actual full scale war. Additionally the Scrin never attempted to engage the space assets of the GDI even after the Ion Cannon barrage, instead they began ground level operations and deployed superior in-atmospheric craft such as the Planetary Assault Carrier and the Mothership which hopelessly outmatched any human aircraft. 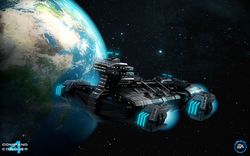 By the Fourth Tiberium War in 2077, GDI had established the First Fleet, a series of massive Global Stratospheric Transport spacecraft, to rapidly and flexibly deploy their forces anywhere on Earth, eliminating the need for static space platforms like the Philadelphia to deploy troops to global hot-spots.