Even space is no longer a safe place, as the Allies and the Soviets developed Space technology and used the "Space Race" as another means to each other's destruction, mutually assured or not. Take Operation: To the Moon in the Psychic Dominator Disaster for example.

In spite of being #1 in technological levels, we have yet to see the Empire of the Rising Sun develop space technology from what advanced innovations they developed so far - if they interfered with the Space Race, the outcome of the Third World War would have been radically different, the thought of Japan establishing space superiority unthinkable.

Space technology is highly advanced, in reference to Our World. 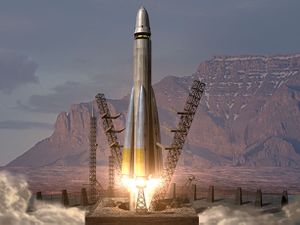 The Allies spy satellite lifting off

The Allies developed Spy Satellites to reveal the entire battlefield, giving them a major strategic advantage - and their first steps into space in extension. Allied battlefield experiences on Luna during the Psychic Dominator Disaster are, at best, theoretical simulations.

In the War of the Three Powers, the Allies use the Athena Cannon with satellite-assisted units, instantly known for using LASER beams at long range. These satellites could also deflect other kinds of weaponry, as shown in A Monument To Madness.

Being based on flying saucers of pulp sci-fi fame, Yuri's Floating Discs worked perfectly in space environments in the closing battles of the Psychic Dominator Disaster on Luna in Operation: To the Moon. He was the first in history to build a fully-functional lunar base, but it was destroyed by the Soviet troops, led by none other than the Soviet Commander.

He also wielded some Cosmonauts of his own and his Mastermind and Magnetron tanks worked at space as well, making them off-world unconventional units. 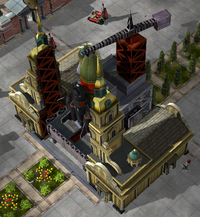 A Soviet space shuttle on the Leningrad fort launch bay.

In the Psychic Dominator Disaster, the full extent of Soviet military space technology in the Space Race was evident on Luna in Operation: To the Moon: Soviet-invented Cosmonauts are LASER-armed space soldiers that proved themselves in the closing battles on Luna. The Desolator suits and Tanks - Rhino and Apocalypse -, beside Flak Track and Terror Drone, can also be built and deployed on the moon as well, making them effective off-world assault units; proof that even in space there is no safe haven.

The USSR, being the first to achieve space flight and technology in the Space Race, developed Magnetic Satellites which picks up targeted (metal based) victims and Orbital Drops which devastates enemy targets, including dropping the vacuumed hostiles into their deaths.

Cherdenko, in the unfortunate event of the War going highly against the Union's favor, had a space station to escape to in the final Allied battle of WWIII because, according to him, Earth was corrupted by Capitalism - the only question is where in space would the Soviet Premier flee?