The Spectrum tower is a powerful high-tech Allied base defence.

The Spectrum tower focuses and amplifies light waves to form an extremely destructive burst of high-energy photons, which can cut through any substance easily. 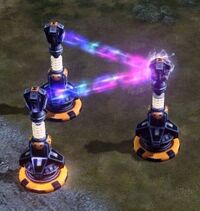 Three Spectrum towers charge each other

The Spectrum Tower is extremely effective against enemy infantry, vehicles, or ships foolish enough to venture within lethal range. It can torch any biological target with one shot, and two or three Spectrum Towers can annihilate any armored vehicle. Their notable quirk is that nearby Spectrum Towers can distribute their power to ones, that have a target; shortening recharge times and dealing more damage. The more towers nearby, the faster and more powerful the tower.

Unlike the Spectrum Cannon found on Mirage Tanks, the Spectrum Towers can fire from a longer range. However, they are still outranged to siege units such as Athena Cannons, Pacifier FAVs, V4 Rocket Launchers, Wave-Force Artillery, Dreadnoughts, Aircraft Carriers, and Shogun Battleships as well as enemy aircraft, which it cannot engage.

The tower selects and attacks targets one at a time making it troublesome when overwhelmed.

Spectrum Towers are expensive and power consuming thus requires a lot of power plants should a commander wants to sustain such defenses and also is best to supplement these ground-focused defenses with Multigunner turrets to provide AA defense.