Surveillance footage of the Spy's primary and secondary combat functions

I first met Gordon Hughes near the Hamburg docks in a dark, smoke-filled tavern; the kind of place often frequented by gruff old mariners in search of nothing more than solitude and a mostly-clean glass of thick ale. I was the obvious outsider, my colorful parka a stark contrast to the sea of heavy, dark outerwear and matching faces of the men that periodically shot surly, suspicious glances my way from across the tops of their quickly-draining mugs. Hughes, however, looked as if he had been sailing the North Sea his entire life. He chuckled to himself as he adjusted his watchcap, revealing a wash of salt and pepper hair. "You'd have never made it in my line of work. You're a fish out of water here," he said with a thick Prussian accent.

Hughes is a retired spy. He has spent over 30 years undercover stealing the deepest, darkest secrets of the Soviets and, more recently, the Empire of the Rising Sun. A master of disguise, he will only consent to be interviewed at the place and time of his choosing, under a false name and an altered appearance. He is in complete control of the situation. 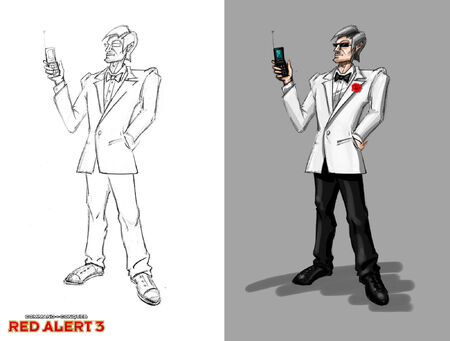 Masters of disguise, Allied spies are experienced veterans whose loyalty is unquestioned.

Now we sit outside of a small cafe in Phuket, Thailand to continue our interview. He orders coffee and a pastry, his accent French now. When I comment on his white linen suit and European looks, he points out that being inconspicuous does not always mean blending in.

GH: It's a matter of expectations. It's important to appear to be what people expect to see. The people here expect to see wealthy Europeans. And the occasional journalist.

GH: Well, I wasn't trying to [catch a] peek at girls in the locker room; I was trying to get hold of the most guarded secrets in the world. For that, a few francs can be very persuasive.

BM: What sort of technology did you use? Any special gadgets or transportation?

GH: Most of that is just fantasy. No, no, I used my brain. The most important aspect to successful espionage is basic human psychology, how to manipulate perceptions and make people see what you want them to see. For some, the ability to read people is a natural talent--it then becomes a matter of training yourself to react appropriately, to lead the mark to whichever logical conclusion you desire. People are actually very easy to manipulate. Animals...well, they're a different story.

I wanted to pursue this further, and better-understand Hughes' ontological distinction between humans and "animals", but the expression on Hughes's face dissuaded me. Then it passed, and he was once again the urbane expatriate Frenchman. 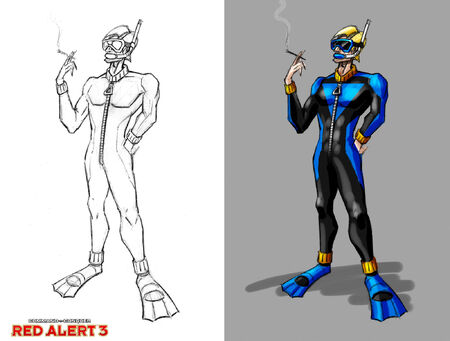 The popular image of the spy holding a Martini in one hand and a voluptuous woman in the other is surprisingly accurate, at least for when they're not infiltrating an enemy base.

BM: What would have happened if you had been captured?

GH: ...We were of course issued poison for such an eventuality, but I never knew if I would use it or not until I heard stories about those who didn't.

(He takes a drink before continuing).

If I were captured now, I wouldn't hesitate.

BM: Of course, there would be no reason to capture you now, would there?

GH: Of course not.

BM: But then, why do you carry on with the disguises?

The smell of expensive perfume fills my nostrils and I am suddenly aware of a stunning blonde woman standing directly behind me. "You must excuse me, my date has arrived," Hughes says as he rises to leave. He dons his fedora and tips the brim in my direction before taking her arm.

"Da svedanya," she says with a smile.

A warm breeze, pregnant with the briny aroma of the nearby ocean, wafts over the cafe, and then they are gone.

Battlefield reconnaissance has revealed at least these facts about the Spy: