St. Basil's Cathedral is an iconic Moscow landmark which appears in the Red Alert Universe.

St. Basil's Cathedral was constructed in the years 1555-1561 under the order of Ivan the Terrible to commerate the capture of Kazan and Astrakhan. It has long been rumored (though may be true) that Ivan liked the design so much that he had the architect maimed so that no one, not even the architect himself, could design another building to surpass the layout of the cathedral. Although it was a Russian Orthodox cathedral it was perhaps the most unique building in the whole of Russia.

By the time of the Third World War, the cathedral still stood in Moscow at the Red Square. 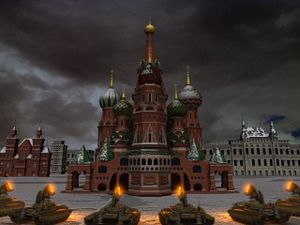 It is located in Moscow, Russia and was seen in the background from the Kremlin. In the Allied campaign, St. Basil's Cathedral was defended by a few Rhino tanks and Flak Tracks, as well as Tesla Coils and Flak Cannons. This however did not stop the Allies' Prism tanks during Operation Chrono Storm. After wiping out the cathedral defenses, the Prism Tanks completely obliterated the iconic landmark, thus marking the Allies' retaliation for the destruction of the Statue of Liberty in the initial Soviet invasion of the United States.

It appears that the Soviet time-travel after the Post-war Crisis meant that by the time of the War of the Three Powers, St. Basil's Cathedral still stands at Moscow. In the Imperial perspective however, the cathedral is destroyed once more, this time by the Shogun Executioner as the Empire of the Rising Sun assaulted Moscow.