Stalingrad (formerly Tsaritsyn, also known as Volgograd) is a city located in the Russian SFSR, situated on the Volga River. It was named after the Soviet leader Joseph Stalin.

Although the city may have originated in 1555, documented evidence of Tsaritsyn located at the confluence of the Tsaritsa and Volga Rivers dates only from 1589. The fortress Sary Su (a local Tatar language name meaning: yellow water/river), was established to defend the unstable southern border of the country. It was located slightly above the mouth of the Tsaritsa River on the right bank. It soon became the nucleus of a trading settlement. In 1607 the fortress garrison rebelled against the tsar's troops for six months. In 1608 the city had its first stone church, St. John the Baptist. At the beginning of the 17th century, the garrison consisted of 350-400 people. In 1670 troops of Stepan Razin captured the fortress; they left after a month. In 1708 the insurgent Cossack Kondraty Bulavin held the fortress. In 1717, Bulavin (who died in July 1708) was sacked by the Crimean Tatars and Kuban. Later, in 1774, Yemelyan Pugachev unsuccessfully attempted to storm the city.

In 1691, Tsaritsyn established customs. In 1708, Tsaritsyn was assigned to Kazan Governorate; in 1719, to Astrakhan Governorate; According to the census in 1720, the city's population was 408 people. In 1773, the city became the provincial and district town. From 1779, it belonged to Saratov Viceroyalty. In 1780, the city was under Saratov Governorate. In the 19th century, Tsaritsyn became an important river port and commercial center. The population expanded rapidly during the 19th century, increasing from fewer than 3,000 people in 1807 to about 84,000 in 1900.

During the Russian Civil War, Tsaritsyn came under Soviet control from November 1917. In 1918, Tsaritsyn was besieged by White troops under Ataman Krasnov. Three assaults by White troops were repulsed. However, in June 1919 Tsaritsyn was captured by the White forces of General Denikin, which left the city in January 1920. This was known as the Battle for Tsaritsyn. The city was renamed Stalingrad after Joseph Stalin on April 10, 1925. This was officially to recognize the city's and Stalin's role in its defense against the Whites between 1918 and 1920. Under Stalin, the city became a center of heavy industry and transshipment by rail and river.

During the Second World War, the USSR used it as a command post.

During the Imperial Campaign of the Third World War, the Empire of the Rising Sun attacked this city, due to its symbolic status and its monuments. A revered Soviet monument, the Mother Russia statue, was leveled along with much of the city's other monuments in order to demoralise the Soviets. It was during this battle that the Soviets first had a taste of the Imperial mechanized armored divisions, including transforming units such as the Mecha Tengu.

Its strategic location also meant it is a major location on the Imperial supply route. Soviet forces attempted to destroy Imperial transports heading west through the city but failed. Zhana has her family living in this city when telling the Imperial Commander on his transmitter. 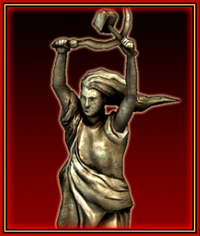 ﻿Stalingrad was a key battle in real-life World War II, between the USSR and Germany. This was one of the bloodiest battles in military history and a key turning point to the USSR's total victory. The Germans had controlled 90% of the city, but were repelled in an offensive by Soviet forces from November 1942 to early 1943.