From Command & Conquer Wiki
(Redirected from Steal the Detonator)
Jump to: navigation, search

Extract the Detonator is the seventh Nod mission of Tiberian Dawn.

The immense success of Nod's North African campaign had seen the fall of nearly all of northern and western Africa to Nod forces. The governments of Benin and the Ivory Coast were planning to defect to Nod forces in a bid to save themselves. At the same time the GDI appointed transitional government in Nigeria was on the verge of collapse with the old deposed government poised to resume power.  In order to forstall these outcomes so that sufficiant reinforcements could arive to reinforce GDI forces in the area and push back the enemy the GDI had installed a nuclear device in a major city in each of the countries.

By hanging the threat of nuclear annihilation above the heads of all three governments (the Beninese, Ivorian and old Nigerian ones) they would be able to gain enough 'influence' to remain in control of the three countries.

However there was a key weakness in their plan. Presumably so that no fingers would point their way, the GDI had installed the nukes with seperate detonators located nearby in GDI bases, bases near Abuja in Nigeria, Abidjan in the Ivory Coast and Porto-Novo in Benin. But unfortunately for them Nod spies learned of the location of the detonators.

A small Nod force entered each of the countries and proceeded quickly to the location of the bases. They then proceeded to fight their way inside, stealing the nuclear detonators located in all three of the bases.

Once they had control of the detonators, they proceeded to the designated lift-off points where they transferred the nuclear detonators into the Chinook helicopter that had been assigned to support them. Having done so they then escaped either by land or in the helicopter. 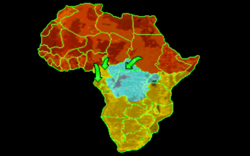 Having successfully retrieved the detonators, the GDI were unable to use them to influence the decisions of the local political leaders. The governments of the Ivory Coast and Benin swiftly surrendered to Nod as they had planned while the old Nigerian government retook power and pledged themselves to Nod's cause. Nod had finally secured complete control of West Africa.