The Steel Talons is a unique experimental technology division of GDI that specializes in utilizing untested technologies, providing near overwhelming force and firepower. The Talons were formed after the resolution of Firestorm Crisis, by General Joshua Mitchell. Mitchell's belief in having a substantially more highly advanced weaponry than any Nod opposition shaped the Talons' combat doctrine.

Thanks to General Mitchell, the group was a test bed for a variety of the state-of-the-art military technologies, many of which were adopted into regular use by GDI forces by the Third Tiberium War. Notably, the division still uses mechanized walkers, such as the Titan and Wolverine. Both have been redesigned since the Second Tiberium War.

Steel Talons is not the official designation of the unit; the name was given to the unit by Mitchell's admirers in the media, notably the famed war hero Nick Parker. Because of their unique purpose, the Division is somewhat autonomous from the rest of GDI.[2]

With Nod's defeat and splintering, GDI believed that the organization was no longer a major concern. With the damage done to the environment, the GDI switched its strategy to fighting Tiberium instead. Many resources were refocused towards Tiberium abatement, as was most of the research and development funding. As a result, the military's focus on technological innovations (which began since the First Tiberium War) had ended. Several officers objected to this trend, the most vocal being General Joshua Mitchell.

Mitchell's arguments finally convinced GDI (after a reportedly "volatile" meeting) to provide funding towards an elite experimental combat division. While the trend of moving towards reliable, cheaper technology meant the Steel Talons were not equipped with harmonic resonance weaponry, the Division sought to combine the latest mass-production armaments with cutting-edge weapon platforms (such as mechanized walkers) and tactics.

Perhaps to symbolize their aspiration to continue the TWII-era GDI's innovative efforts, their insignia looks like a mirror image of the GDI insignia during the Second Tiberium War. Following their formation, the Steel Talons gained a reputation for its secrecy, aggressiveness, and effectiveness. In the skirmishes in the interbellum of the Firestorm Crisis and the Third Tiberium War, the unit would rise to prominence.[2]

In 2034, a GDI research facility in Australia storing captured Nod stealth technology, under the protection of Steel Talons, was attacked by a Nod strike team led by the AI LEGION. The Steel Talons attempted to repel the Nod invaders, and as a last resort, even attempted to destroy the research facility to prevent Nod from recovering the data. However, LEGION's forces managed to defend the lab until the upload completes, and quickly retreated before Steel Talons reinforcements could arrive in time.[3]

The Steel Talons also maintained several Pulse scanners near Black Hand leader Marcion's base in Australia, whose forces found a way of circumventing them. During the battle between loyalist Nod forces and Marcion's Black Hand, if one of the scanners is triggered, Steel Talons forces would arrive and attack both sides.[4]

After Marcion and the Black Hand rejoined Nod, LEGION faced the Steel Talons once again when he was ordered to destroy GDI's top secret Institute for Liquid Tiberium. The Steel Talons defending the research facility proved no match for the Black Hand forces led by LEGION, and the Liquid Tiberium facility was destroyed, causing a catastrophic explosion that turned Central Australia into a Red zone.[5]

What happened to the Steel Talons after 2034 is unknown. Though based on the fact that neither they nor their walkers were seen during the Third Tiberium War, as well as Kane's remark that they were "lost to history",[1] it can be assumed that they faded into obscurity after the string of humiliating defeats they suffered. Though they apparently still existed as an organization, as Steel Talons walkers were seen guarding the Rocky Mountains Complex in 2052.[6]

Little is known about their fate after TWIII, though they were confirmed to have participated in the Incursion War.[7]

Because the Steel Talons first formulated the technology, the battalion's arsenal is similar to GDI's during the Third Tiberium War. However, their combat doctrines shift focus to armored warfare, explaining why the battalion does not deploy Zone Troopers, Commandos or Sniper teams. Armories are therefore unnecessary. They do not deploy Predator tanks, Sonic Emitters or Shatterers either and primarily replaced with walker units, which can be easily destroyed by Commandos with explosives. Due to their lack of harmonic resonance technology, they are unable to construct Sonic Emitters, relying on Guardian Cannon, which can be upgraded with rail guns. As a result, the Steel Talons lack defensive power, and their base defenses are completely powerless against mobs of enemies, making it very soft to strike with heavy units. 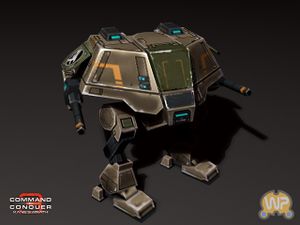 Experimental precursor to the Mk. III Juggernaut, equipped with a loading bay for infantry to increase its close-range defensive ability.

Similar to a regular engineer, but has a handgun that is more effective against hostile infantry than the outdated GD45 handgun which is a standard issue handgun for engineers.

It has fire port for 1 infantry squad to allow it greater survivability in the field.

Guardian APC-variant. Trades its machine guns for a repair drone that can repair allied vehicles, similar to a Rig.

New-type Mechanized Walker that predates the usage of the Predator MBT. Can be upgraded with railguns and adaptive armor and can crush tanks.

New-type Anti-infantry walker predating the Zone Trooper. It can be upgraded with advanced AP rounds that make short work of even heavily armored Black Hand infantry.

A double-edge sword, the Railgun Accelerator increases the refire rate of railgun equipped vehicles but also damages those units during the accelerator's activation.

Increases armor of Mammoth tanks and Titans. It also gives immunity to EMP, but reduces the rate of fire.