Surveillance footage of the Stingray's primary and secondary combat functions

In the Vorkuta Unrest ten years ago, hundreds of Soviet combat engineers and shipwrights were corralled and given strict sentences in response to their attempted protest of the Soviet Union's continued research into its Tesla-based weapons technology. The stingray-class strike vessel--a first attempt at a naval weapons platform featuring the Soviets' infamous electric coilguns--nevertheless went into full production the following year. The Soviet Ministry of Experimental Science, responsible for the Tesla Coil and all its spin-offs including this one, has continued tinkering with and revising the stingray design ever since, obsessively iterating on its capabilities by continually mining data from stingray performance logs. The current model, assures the Ministry, is the safest and most effective yet.

The stingray is the Soviet Union's lightest, quickest, and most maneuverable platform able to use its feared Tesla technology. Pictured is one of the many failed variants.

The stingray was first invented when the eccentric Moscow-born scientist Roman Grozavitz, responsible for the portable capacitors still used in the Tesla trooper armored suits, decided to outfit his private speed boat with a pair of Tesla coils in order to enhance his frequent fishing expeditions. The coils, he assumed, would not only be used to effectively hunt the fish, but would simultaneously cook them to a burnt crip, just as he liked. This whim gradually became an obsession; Grozavitz worked tirelessly to outfit his boat with a rubber-coated, insulated hull and a power supply that was light yet efficient. While the work left him wifeless and rubleless, the Soviet Ministry of Experimental Science took notice and took him under its wing, granting subsidies and providing accommodations for the "brave ... innovative exploration into the science of lethal electrocution," as the Ministry Weekly Journal reported at the time. Soon enough, the Soviet Union was crafting that which was previously considered impossible, or at least stupid: fast-moving ships fitted with electrifying weapons that could reduce more than just fish down to their elementary particles. Today, some still consider the late Grozavitz a hero for helping unearth some of the true destructive potential of Nikola Tesla's lifetime of work. 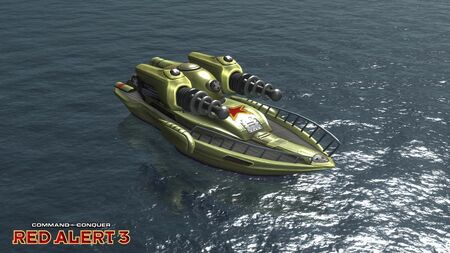 Once limited to the seas, the latest versions of the stingray feature collapsible movers that allow these vehicles to climb up onto dry land.

Once the Union understood how to create fast-moving strike ship with insulated hulls and Tesla-based weaponry, the Ministry of Experimental Science excitedly explored various improvements to the original design. The only one that stuck after all these years are the stingray's collapsible movers, which resemble the six legs of an insect, and allow the vessel to move on dry land over rough-hewn terrain, much like the Sickle security vehicle. The need for this arose as the Union's enemies realized that the best way to retaliate against stingray assaults was to fight them from inland, capitalizing on the limited range of the Tesla coilguns as well as the light armor of these ships. Now that they can move onto shore, the enemies of the Union are no longer safe even on land.

Because of the inherent danger in the design of these ships, the Union recruited scientists in poor standing to operate them, offering them generous-sounding compensation packages and an opportunity to be featured in the Weekly Journal in exchange for successful tours of duty.

Battlefield reconnaissance has revealed at least these facts about the Stingray: