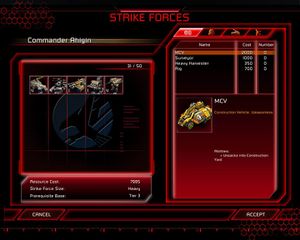 A strike force is a military formation equipped for the purpose of assaulting enemy forces or bases. In the Global Conquest mode of Kane's Wrath, several kinds of organized strike forces are deployed by GDI, Nod and Scrin commanders, ranging from small scouting groups to devastating battalions, to serve as the mechanism through which each faction attacks opposing strike forces and bases and constructs new bases of their own. Each faction's tactical AI operates with the standard set of strike forces available, as well as computing additional sets of their own which are not automatically available to the commander.

Strike forces are denoted by a diamond icon on the world map containing the relevant subfactional insignia, with a number of extra corners according to the size of the strike force (1-light, 2-medium, 3-heavy, 4-ultraheavy), and upon selection a circumference indicating the unit's area of influence and interaction/movement range, each sharing the house color of the primary faction.

Official strike forces used by all sides are listed below, including notes on their respective compositions and credit/point costs. Note that they are ordered based from what is shown in-game. For the sake of convenience, strike forces with italics are those exclusive to the AI, while those with bold text are those that are created via support powers.

Players are able to make any strike force they want, but the maximum limit is 50 points. More information on the units' point cost is shown below:

Commanders can do a number of things once they have selected a strike force.

The most basic orders are moving and attacking, which is done by selecting the strike force, then clicking on a terrain on the world map or enemy base/unit. When clicked on a hostile unit or base, the movement order will be automatically changed to an attack order.

When a strike force is selected, a coloured ring around it shows its move/attack range. It indicates how far it can travel in one turn.

Issuing an "aggressive stance" command to the strike force allows it to attack any hostile unit within its attack range until ordered otherwise. This is useful for holding a certain location.

Strike forces can be teleported or transported between ports (only Nod/GDI), a Wormhole duo (only Scrin) and tech 2 bases with the transport command, which requires $1000 to execute. When the command is selected, tiny colored rings indicate where the strike force can be transported to. It takes one turn to fully transport a strike force.

Strike forces can be instructed to build a base, if they have an MCV and $6000 as Nod or GDI, or a Drone Ship and $8000 as Scrin. Building a tier 1 base requires one full turn. A base may only be created in the movement range of the strike force. When the command is selected, the commander may choose the place he wants the base to be built on, and see how much resources it will provide at that moment.

Strike forces can be decommissioned to remove them from the field, and refunding part of their worth instantly.

And last, any order given can be cancelled with the "cancel command" button. If execution of the cancelled order included a credit cost this is immediately refunded in full.

Scrin groups are referred to as "clutches", "swarms" and "nests", which are fitting due to their insect-like appearances.

Default strike forces of the Traveler-59 subfaction are recruited at a small discount from the cost of a player-created strike force of identical constitution.