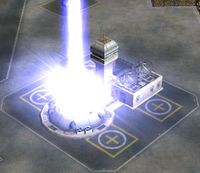 Since the end of World War II, countries worldwide have sought to possess weapons of mass destruction; WMDs are often seen as a bargaining chip, a sign of military strength, and as a last resort to fall back on when other solutions won't grant the necessary results. During the war that the Global Liberation Army waged against the US and the PRC, all three factions used weapons of mass destruction.

The Chinese PLA chose to use Tactical Nuclear Missiles, launched from a Missile Silo, to deliver a devastating nuclear warhead. These were expensive to build and highly visible to enemy units, but their devastating missiles would cause unrivaled damage to enemy formations. Lethal levels of radiation would linger in the blast area for a considerable while, further damaging infantry and vehicles.

The GLA used Scud missiles, antiquated but still dangerous ballistic missiles; even more dangerous when the anthrax payload was taken into account. The anthrax was especially dangerous to infantry; tanks and structures that survived the initial explosions would be likely to survive. GLA leader Doctor Thrax used a more refined strain of anthrax in his Scuds, while General Juhziz chose to remove the biological payload in favor of more explosives. American Ambulances were equipped to clean up areas contaminated by anthrax or nuclear radiation.

America chose a high-tech WMD, the Particle Cannon. The Particle Cannon fired a particle beam into space, which would then be reflected towards the target by orbiting satellites. A commander would be able to adjust the position of the beam, allowing them to minimize collateral damage and hit specific targets. It had a faster recharge rate than Nuclear or Scud missiles. General Alexis Alexander was known to utilize cheaper but equally powerful Trojan Particle Cannons.

Leang is confirmed to use all three powerful weapons for defense.

All superweapons are often expensive and once built it would become a target priority to enemy commanders.