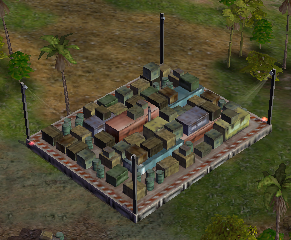 A supply dock during the First GLA War. 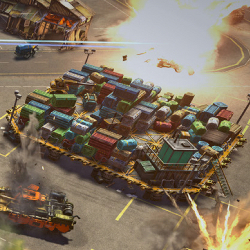 A supply dock during the Second GLA War.

Supplies were the main resource used by generals during the war against the GLA and the following Second GLA War. They were boxes containing valuable material Generals needed to construct buildings, train infantry, build tanks, aircraft, research upgrades, etc. They were found in almost every battlefield, often in Supply docks, and generals needed Supply Centers / Supply Stashes in order to take, storage, and process the supplies. The Americans used Chinooks, the Europeans used transverse rotorcrafts, the Chinese and the APA employed Supply Trucks and the GLA forced the workers to collect supplies as well as construct buildings. Generals often built supply centers near supply docks to provide faster gathering. Supply boxes are not poisonous, but count as structures which take up space and can block vehicles from passing through them.

Supplies could be found in Supply Docks in big quantity, or scattered around the area as small piles of boxes. Sometimes they could also be found as big UN Crates. These crates were quite different than the standard ones because they didn't require a supply collector to carry it. Any unit could pick up the UN crate and claim the supplies for his own side. Also the USA used Supply Drop Zones, support structures which received supply crates from C-130 Hercules transport aircrafts. Supplies were processed immediately upon landing.

Since all supplies eventually drain, it's a good idea to quickly switch one's economy to hacking, criminal fundraising activities, dropping, petroleum, or scavenging, to get access to unlimited funds from off-battlefield sources.

The GLA, in their long experience of scavenging the battlefield, may recognize rubbish or enemy "leftovers" as a sort of "supplies" for them. They may collect it with any infantry or it can upgrade the weapons of several of their vehicles. Veteran GLA vehicle operators may be trained to do some vehicle repair with whatever they can find on the battlefield.