The Defence of Sydney at the Sydney City Wall is the second mission of act IV in the Nod campaign of Tiberium Wars.

Nod managed to steal GDI's nuclear warheads but the arrival of aliens had changed the war dramatically. With both Nod and GDI unable to defeat the aliens alone, Kilian Qatar approached the GDI commander in charge of the Sydney Blue Zone and arranged a ceasefire. Most Nod followers, especially Ajay, were outraged that Qatar had the gall to propose an alliance with GDI and going against Nod ideology.

Qatar admitted that the alliance of convenience was unorthodox but had an ulterior motive. While Nod helped defend Sydney, they would also steal GDI's nuclear launch codes in the hope that the missiles will counter the aliens' offensive.

When Nod arrived at the Wall, the aliens were already staging an assult on the GDI forces. The Legendary Insurgent quickly established his base of operations and began setting up defenses. Nod was to destroy the aliens' production structures desginated as the Portal, Warp Sphere and the Signal Transmitter while GDI attempted to delay the aliens' invasion of Sydney. The Scrin soon attacked the Nod base but the Nod defenses were very formidable for the aliens. To establish more funding the Nod commander had two Saboteurs capture the Tiberium Spikes in the northwest. The Saboteurs were airlifted by Carryall away from the main engagements and eluded the Disintegrators and local mutants to capture the spikes. 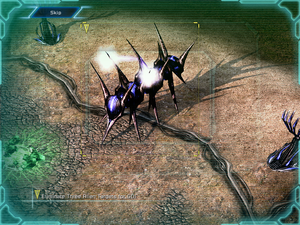 One of the target Nod must destroy to help GDI

The aliens' assault was intensifying. While Nod was able to hold back several waves, the GDI defenses were systematically beng eroded away due largely to the combined forces of the Annihilator Tripods and the Scrin air force. Nod noted the destructive power of the latter and quietly decided to delay their assault on the Gravity Stabilizer for a little longer. However, Nod launched several air raids on the Scrin base, and systematically took out the defenses, the Portal and the Warp Sphere, depriving the aliens of their ground forces. The Scrin's Storm Columns in turn destroyed many of Nod's units. 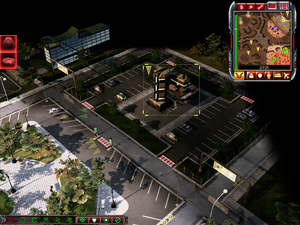 With the GDI base flailing the aliens destroyed a section of the wall. Ajay saw this as an opportunity for Nod to capture a GDI lab holding the nuclear launch codes. After destroying the alien units in the way, a Nod force escorted a Saboteur to the lab, and managed to get the launch codes. About this time, Ajay received an anonymous message ordering the destruction of GDI's ion cannon control center. Thinking that GDI would be defeated if they were deprived of their superweapon, the Insurgent had Nod destroy the structure.

As the aliens started to head for Sydney, Nod decided to give GDI a reprieve. Under pressure, the ground forces combated the aliens while the Vertigo bombers and Venoms supported from above. After much fighting the Nod forces took out the Signal Transmitter, and the Gravity Stabilizer for good measure. With their mission completed, Nod pulled out "hoping" that they bought GDI more time to defend their precious blue zone.

Nod managed to steal GDI's nuclear launch codes. However the aliens were still pushing their way to Sydney despite the setback. GDI had no choice but to evacuate the city, with Nod to assist.