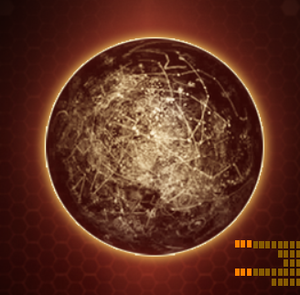 Tacitus as it appears in Kane's Wrath

The Tacitus (Latin, silent) is an ancient and extraterrestrial data matrix[1] that played a prominent role during the Tiberium Wars between GDI and Nod. Both factions used the Tacitus' data to improve their technology and understanding of Tiberium and control of the device was highly sought after. It is key to the ascension prophecies, the core mythology around which Kane built the Brotherhood of Nod.[1]

It originally consisted of two segments, one being present in the ancient Temple of the Tacitus in Bolivia.[2]

The Forgotten acquired the Tacitus prior to the Second Tiberium War and their leader, Tratos, learned to translate it. The mutants hoped to find some way to reverse their mutations.[3] Tratos and the device ultimately fell into Nod hands. Kane tricked the Forgotten leader into aiding CABAL[4] translate the device for Nod's designs.[3] Tratos later regretted cooperating with Nod; he realized too late the translated data was being used to create Tiberium weapons, lifeforms, all aimed toward Nod's final goal of creating a Tiberium world.[5] GDI initially refused to believe the existence of the device despite gaining the Forgotten as allies.[6] Any remaining doubts about its existence were dispelled at the end of the war when GDI recovered the device from the Nod Pyramid in Cairo.[7] GDI regarded information regarding the Tacitus as highly classified.[8][9]

After his public return Kane ordered Commander Anton Slavik to deliver a Nod high-technology ship to Cairo. The ship held the Tacitus and other technologies useful to Nod and was stored in a subterranean hangar. However, General Vega reached the hangar first and took the ship for a personal endeavour in South America. However, Vega was unable to control it and the ship crashed.[10] Slavik arrived to find the ship abandoned and the Tacitus missing.[11] 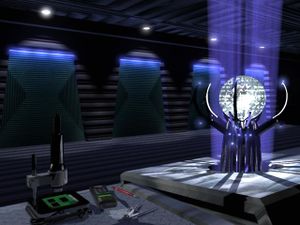 The Tacitus in CABAL's lab.

Although the war was won by GDI, Tiberium contamination was reaching critical levels. The Daedalus Team believed the Tacitus to be the best approach to acquiring the necessary knowledge to fight Tiberium.[4] The device and Kane's accumulated notes and data were scheduled to be shipped immediately to the Daedalus Research Complex[8] where Tratos could continue translation.[4] The Tacitus was loaded onto Kodiak at Cairo but the ship was destroyed by an ion storm in flight. This coincided with the beginning of the Firestorm Crisis. As one of its first duties, General Paul Cortez ordered the emergency Firestorm Taskforce to recover the Tacitus.[8] GDI did not locate Kane's store of translated data.[1]

Tratos was assassinated by Nod on CABAL's orders[12] before receiving the Tacitus[4] and translation proceeded slowly.[13] Doctor Gabriella Boudreau estimated Tratos' death put the project years behind schedule, when it was estimated the atmosphere would be toxic to humans within a year. The doctor proposed to use CABAL as a substitute translator; the Nod AI helped Tratos translate the Tacitus for Kane.[4]

The Firestorm Taskforce captured CABAL core in Poland. This was to the AI's design. It knew translation efforts were crippled because the device was physically incomplete. Nod had failed to retrieve the missing segment and it hoped GDI would be more successful.[14] CABAL convinced GDI to retrieve the missing segment after revealing the nature of the problem. The AI even pinpointed the segment's location in northern Bolivia for the Firestorm Taskforce. The segment was sequestered in a complex of ancient step pyramids occupied by a small religious group. A GDI archaeologist deciphered the pyramid hieroglyphs to determine which one the segment was stored in.[2] CABAL took the completed device and unleashed its cyborgs on GDI.[14]

Ironically, the Tacitus was, in turn, stolen from CABAL by the Forgotten. The AI used Nod forces to recover the device for it.[15] The Brotherhood's Inner Circle grew increasingly uneasy with the AI's independence, including its unilateral recovery of the Tacitus and assassination of Tratos. CABAL finally broke with Nod when the Inner Circle threatened to deactivate it.[16]

The Tacitus was retrieved by GDI from a CABAL core at the end of the Firestorm Crisis.[17] While Doctor Boudreau made a series of breakthroughs on the whole GDI continued to struggle with interfacing with the Tacitus and data recovery remained slow.[1]

After GDI's recovery of the Tacitus, it was stored in the fortified Cheyenne Mountain Complex for analysis.[1]In the interwar period, further GDI Tacitus research uncovered references to the Scrin and their future invasion.[9] Unbeknownst to GDI the Scrin were a key factor in Kane's strategy for the Third Tiberium War.[18]

Even with the Tacitus in GDI's hands, a secretly restored Kane was not totally without the device's services. Tacitus shards aided him during the creation of LEGION, CABAL's successor.[19] 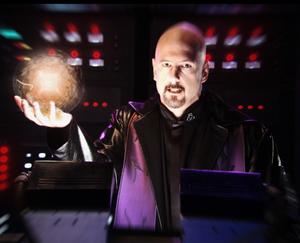 Tacitus translation was the responsibility of GDI InOps when the Scrin invaded Earth.[9] They noted the structure of Scrin data transmissions was patterned on the data structure found in the Tacitus, but were significantly different such that it was unlikely the Scrin were the exact originators of the device.[20] Decryption programs similar to those found in the Tacitus were used to interface with and capture Annihilator Tripods.[21]

Nod located the Tacitus in China as GDI prepared to transport it away by sea. On Kane's behest, LEGION intercepted and captured the land convoy carrying the device. The AI was maliciously shut down by Abbess Alexa Kovacs before the Tacitus could be extracted. [22]

The Key to Ascension[edit | edit source]

After LEGION's failed attempt to intercept the Tacitus, it was back under GDI control and was transferred back to the Rocky Mountains Complex. The device's condition was deteriorating and the probability of destroying it increased with every test.[23] Kane was disturbed by the development, and feared GDI may have damaged it beyond repair, but chose to wait until LEGION reactivated in 2052.[24] Nod was much reduced as a result of the Third Tiberium War. The forces needed to assault the Tacitus facility was found in the Marked of Kane.[25] LEGION recovered the Tacitus and interfaced with it.[24] 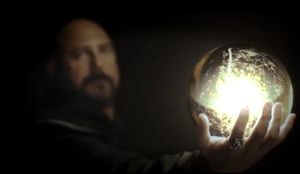 Kane holds up the Tacitus before GDI's command

Kane showed the Tacitus to GDI in 2062. Presumably interfacing with LEGION stabilised the device, since Kane could publicly display it without fear. The advanced knowledge of the Tacitus was later used to create both the Tiberium Control Network and Optical implants.

Command & Conquer 3: Tiberium Wars claimed GDI confiscated the Tacitus from Nod in 2028.[9] However, GDI did not acquire the Tacitus until the end of the Firestorm Crisis, which took place after the Second Tiberium War in 2030.[17]

The year in which GDI captured the Tacitus was later retconned to 2032 in Command & Conquer 3: Kane's Wrath.[1]

Behind the Scenes[edit | edit source]