Tacitus Interruptus is the eleventh mission in the Nod campaign of Kane's Wrath. The objective is to recapture the Tacitus from GDI. The Brotherhood managed to retrieve the device, but LEGION was unable to connect with the device due to Alexa Kovacs deactivating LEGION and eventually GDI recaptured the Tacitus.

Nod had managed to track the Tacitus to China. The artifact was being moved by a ZOCOM convoy to a port for shipment by sea. Due to the fact that Nod did not have a sizable naval force to intercept the shipment were it to be shipped, Kane ordered LEGION to intercept the convoy and retrieve the device. Alexa Kovacs duly conveyed the orders despite private misgivings of LEGION's continued evolution. 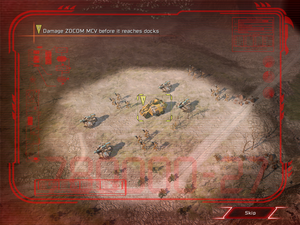 A sizable Nod base was already established in preparation for the mission. Intel pinpointed the Tacitus in a ZOCOM MCV escorted by Zone Shatterers and ZOCOM infantry. To prevent the MCV from reaching the port, Nod needed to damage the MCV so that it will deploy into a Construction Yard, and allow a saboteur to capture it. However ZOCOM also had three bases in the area, so capturing the ConYard on the spur of the moment would risk its destruction along with the Tacitus. LEGION therefore immediately prepared a division of attack bikes and raider buggies and engage in hit-and-run tactics. The Nod AI had the fast units ambush the convoy in the ruined town, and damage the MCV before retreating back to base.

ZOCOM immediately began deploying its forces and delayed escorting the ConYard to the port. The Nod base immediately began repelling ZOCOM's attacks from the ground and in the air, their sonic resonance heavily damaging the defenses. To cripple their production and harvesting operations, LEGION was granted a new support power called Tiberium Vein Detonation, courtesy of Dr Alphonse Giraud who cooperated voluntarily with Kane. Once a Tiberium Chemical Plant was built and with enough credits, the Nod AI detonated the weapon onto a ZOCOM base surrounding a Tiberium field. The result was that the detonation caused a chain reaction and wiped out all GDI structures surrounding the field. Satisfied, LEGION expanded its harvesting operations and began to block access for ZOCOM to breach Nod's main base. Constructing a larger force, and even a Reedemer, as well as detonating two more Tiberium fields to weaken ZOCOM's hold, LEGION was powerful enough to wipe out any remaining GDI forces if it wanted to. However the main objective was to capture the ConYard, and the Nod AI did so without delay.

To the rendezvous point[edit | edit source]

LEGION was then tasked to escort the MCV to a rendezvous point south of the port. However at the exact moment the MCV was taken, the Scrin arrived in the area. To make things more complicated the present alien forces were part of the Reaper-17, a cult that is a lot more aggressive than the normal Scrin forces and Traveler-59. The Reaper-17 attacked indiscriminately, and what was left of GDI's ZOCOM forces were totally distracted by the newcomers. With haste, Nod escorted the MCV to the rendezvous point while at the same time fight off the alien invaders. Luckily, the Nod convoy reached the extraction point and prepared to evacuate the Tacitus out of China.

Kane planned to connect the Tacitus with LEGION. However, Alexa Kovacs infected LEGION with a virus before this could be done. Kane was alerted to the event and quickly arrived but was unable to rid the virus. Demanding to know why his loyal Abbess did this, Kovacs tried to tell Kane that LEGION would betray him like CABAL, and also revealed that she attacked Temple Prime to frame Kilian Qatar. A shocked but furious Kane then had Kovacs arrested. But Kovacs threatens Kane with a pistol, proclaiming the mantra "peace through power", before shooting herself as LEGION shut down.

As a result of Kovacs's actions, the Nod forces in China were cut off from HQ and could not hold onto the Tacitus from the counterattacking GDI forces. The Third Tiberium War ended with Kane getting a hold of a Scrin tower but left without the Tacitus. LEGION meanwhile would not awaken until 2052... 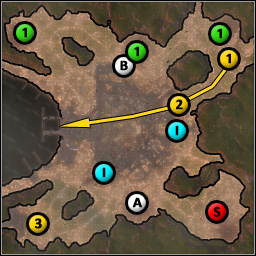 One of the surest ways to win this mission is to make a quick daring expansion. When the game starts (you base it at S), construct the Temple of Nod and build an MCV. Make a second base near the western tiberium field (A) - this position is easily fortifiable and the money yielded can be used later.

What you should do while the MCV is getting built is stopping the enemy (yellow 1). Should the escort reach the docks, the mission ends in failure. If you send your attack bikes to engage the enemy MCV (2), they will damage it forcing it to deploy. From there on, you have time. The MCV won't repackage unless you capture it - so you can savour this mission.

By creating a second MCV and a forward base, you gain the advantage in speed. You must quickly build some defences to the north as the enemy (B) will send his units at you. Do not forget investing in anti-air. GDI uses its Orcas to attack your harvesters, so build the turrets in your main base, too.

There are two Tiberium spikes (blue 1) - you can capture them, but beware of the GDI engineers - they'll try to reclaim them. There are many ways to win this mission, but there are some things you should do:

If you want to win this with all the glory, you must complete the secondary objective. Also, you have to destroy these three types of Scrin units: Shielded harvester, Shard Walker and Reaper tripod to further update the Intelligence Database. Note that for the Shielded harvester's case, you must eliminate Stormriders instead, as there won't be any said harvesters in the mission.

As soon as you escort your newly acquired MCV to the south-western corner of the map (3), you'll win the mission.