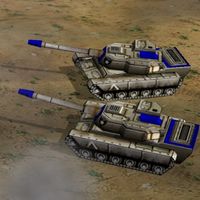 Crusader Tanks can in mass be a undefeatable threat.

Tanks are armored vehicles with treads, that often make up the backbone of offensive taskforces. Historically, Tanks first appeared during the First World War, earning their name from the water tanks they were disguised as. Generally, tanks have one or more cannons which deal decent damage to structures, vehicles, and other tanks, but have difficulty accurately hitting smaller infantry, and therefore dealt less damage via shrapnel. However, as even light tanks weigh several tons, these machines can easily crush infantry by running them over. Also, several tanks substitute other weapons, such as a flamethrower, for the cannons.

Against their armor plating small-arms fire is generally ineffective; however rockets and missiles do greater damage. Also, few tanks have any anti-air defense, and those that do are often still incapable of adequately defending themselves against air attacks. As vehicles, tanks are susceptible to EMP interference as well.

During the GLA war thee three factions adopted different philosophies in tank warfare. While the United States preferred tanks that represented a balance between speed, armour and firepower, the Chinese adopted a blunter approach, preferring to use their tanks simply as battering rams. The GLA, possessing only limited finances, tended to rely on cheaper, less durable but fast-moving tanks when they used them at all. 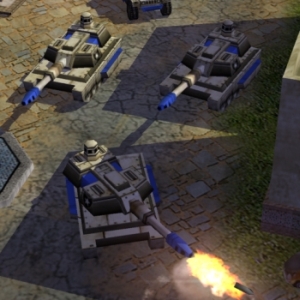 During the earlier stages of the war the US relied heavily on the Crusader, a fairly conventional tank possessing a decent top speed and durable armour, with the further ability to make use of small drones that could perform tasks such as repairing the vehicle. As the war progressed the Paladin, a more advanced tank possessing an anti-missile laser, was favored over the Crusader. Entering service as a prototype, the Paladin proved far more durable in the field, its laser proving effective against the hand-held anti-tank weapons and RPGs that the GLA often wielded. General Townes, an American General specializing in laser weapons took this a step further; his Laser Crusaders replaced the 125mm cannon with a powerful laser, which increased the damage, though it required an external power source. The microwave tank is a special tank that can clear garrisons and disable any structure.

Also note that most of the tanks are not available to use by Alexander or Granger and the Paladin was not even allowed by Townes despite it has lasers. Only Leang is the only one who could build the Paladin Tanks. 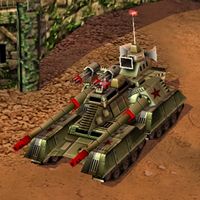 China's basic Main Battle Tank (MBT) was the Battlemaster, an inexpensive vehicle that could be produced in great numbers, but lacked the technological benefits of the Paladin or the speed of the GLA's vehicles. Nevertheless, the Chinese found strength in numbers, often throwing huge numbers of these tanks at enemy strongholds to devastating effect. Far more spectacular was the Overlord, a preposterously enormous vehicle that was literally twice the tank - with two guns mounted on the sides of a single turret and four sets of treads. While slow (at least, without a volatile nuclear engine), the Overlord could be upgraded to suit a number of requirements, with a Gatling cannon and even a five-man Bunker available, These mighty Overlords were even more technologically advanced than paladin tanks with all their upgrades. These juggernauts, able to (sluggishly) roll over other vehicles, represented in a single unit the overbearing strategy of the Chinese war machine - to crush the enemy through overwhelming brute force. Chinese tank technology is also arguably superior to the world, because of their massive reliance on them, many technological benefits are augmented into their Armour.

Dragon Tanks were rolling flame-throwers and potent infantry killers, capable of eradicating even fortified troop garrisons. Their flame weapons were ineffective against armor. The Gatling Tank, equipped with a single large Gatling gun, was also potent against soft targets, and could strike airborne enemy units. Like the Dragon, the Gatling Tank's ordinance was ineffective against heavy vehicle armour.

ECM Tanks did no direct damage to enemy vehicles, but temporarily disrupted the weapons and drive systems of enemy vehicles. In addition, when the main disruption beam was not active, they were able to divert enemy missile attacks away from the tank and other nearby units. They were, however, helpless against infantry and aircraft (moreso when missile protection was not active).

The performance of Chinese tanks could be increased in several ways. Nuclear engines were available as an upgrade, increasing the speed of a tank. Autoloaders, available only to General Kwai, tripled his Battlemasters' rate of fire. Kwai, a tank specialist, also had his own specially-equipped Overlord variant, the Emperor Overlord, which boasted even greater power, notably by mounting Gatling cannons as standard. Also, General Tao, the nuclear general, equipped his forces' tanks with special rounds loaded with fissile material as standard.

The Tanks General might paradrop tanks as well as build cheaper tanks and that's what the enemy does not want. If the Tank Paradroping is done means more and more tanks will attack and weaken the defenses.

Leang is rumored to use Rocket Buggies, Overlord Tanks and the Paladin Tanks.

Scorpion relied on speed, numbers, and battlefield upgrades to carry the day.

The Global Liberation Army, lacking the financial clout of a world superpower, instead turned to renovation and innovation to produce a worthy tank force. The GLA's basic tank, and that which formed the backbone of their armoured corps, was the Scorpion - ancient tanks with near-obsolete armour plating, but retrofitted with engines that gave them a great deal of speed. With the additional optional extra of a crude rocket launcher, these tanks were perfect for outflanking the enemy and performing swift, hit-and-run attacks. For tackling the US and China head-on, the GLA's engineers cobbled together the Marauder Tank, a surprisingly competitive tank given its rather ramshackle origins. While not as fast as the Scorpion, the Marauder could still outrun many of the US and China's heavier vehicles, while also possessing significantly superior armour compared to its lighter stable-mate. The Marauder's main strength was how easily it could be upgraded with spare parts salvaged from the battlefield, although its inability to fire on the move and lack of turret hampered its effectiveness. Dr. Thrax, a GLA bioweapons specialist, equipped all of his tanks with shells filled with anthrax, increasing their lethality.

A certain prince was not interested on using tanks so he used hijackers instead of them.

Like its American counterparts, European tanks utilize advanced digital computerized fire control systems and advanced composite armor to combat against the firepower of the APA heavy tanks and the much improved Scorpion tanks during the 2030s. Even as fourth generation main battle tanks, European tanks, notably the Paragon, still fight in groups in order not to be overwhelmed by opposing forces.

All tanks are vulnerable to mines, aircraft, gunships and most common Rocket Troopers of all kinds.

GLA uses swarms of RPG Troopers due to Scorpions will not pierce the Crusaders. Also car bombs and Demo trucks will cause chaos.

USA uses various anti tank including Missile Defenders which were deadly especially Garrisoned ones can finish off even Overlords or if they didn't get crushed they use their laser guidance for effectiveness. Also Col Burton's gun will do serious damage to tanks and Comanche Gunships will also do devastating results against Tanks. The Crusader in large groups can do disaster to even Kwai's Emperor Overlord. Their superior air force are also extremely effective at destroying tanks.

China with their mass numbers and the Tank Hunter which was known to plant timed TNTs on buildings and Tanks if they don't get crushed. Also Helix and MiGs are deadly against everything off the ground.