Tanya was the codename of an Allied female commando who operated during the first and second iterations of the Third World War. Her skills rival, if not better than those of the famed US Navy SEALs, and was equipped with dual pistols and C4. In addition, she was also trained to swim long distances allowing her to plant the explosives on hulls of enemy ships. Furthermore, she could self-heal at a slow rate due to improved provisions.

After the Soviet Union was defeated, she was trained to resist mind control in case they had to combat it again. She also was trained using her C4 charges on enemy ground vehicles, unlike Navy SEALs. 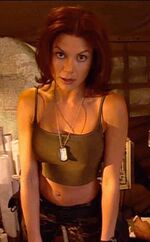 Tanya during the first iteration of the war

The Soviets performed a surprise invasion of the United States, leading to them overrunning Allied positions across the eastern coast. In this time of emergency, President Michael Dugan instituted the Lazarus Protocol and General Ben Carville quickly worked to defend against the enemy forces. Special Agent Tanya was assigned to work with one of the few Allied Commanders who were still in service. At the time, the Soviets had made an invasion of New York and made a move for Manhattan island, where Tanya entered the field to clear the area and re-establish communications with the Fort Bradley base.

Shortly thereafter, Tanya was relocated to Colorado Springs, reporting to General Carville that General Vladimir had taken the Air Force Academy there. Displeased with the pace at which she reported, Carville ordered the Commander to "dig Tanya out of the hole she dug for herself" and make her useful - much to Tanya's annoyance and before she could respond, the General cut the line. The Academy and its belonging base were reclaimed and Soviets were driven out.

Once these victories were achieved, Tanya was called in during a video conference between the Allied Commander, President Dugan and the European Council about the possibility of an aid package for the United States, in the form of supplies and soldiers, following Vladimir's nuclear strike on Chicago. Before this could be arranged, the European Council requested that Tanya destroys two nuclear missile silos on the German-Polish border. French general Réne Lyon was prepared to take command, but Tanya refused to follow orders from anyone other than the Commander, under the excuse that there was "no time to train [Lyon]". President Dugan reluctantly agreed, and Tanya succeeded in the mission.

Tanya was later sent on an off-screen mission by the time the Pentagon was retaken. After this was done, she was dispatched to the occupied St. Louis to destroy a psychic beacon that had enslaved the local population and reclaim the area from the Soviets.

During the battle for Moscow, Tanya personally infiltrated the Kremlin along with a team of GI's in order to capture Alexander Romanov. After breaking through into his office, she discovered that his aides had attempted to dress up one of his underlings as the Premier in a weak attempt at evading capture. Tanya knocked out the imposter and discovered Romanov hiding under his desk in his underwear and vest. With his capture, Tanya posed long with her fellow soldiers for a picture taken by the Westwood Journal, Timely magazine, Bunderswag newspaper and Bleakly magazine which published articles about the end of Third World War, ridiculing Romanov.

With the end of the conflict, Tanya met the Commander at an airbase where she informed him of the victory gala at the White House, to which they were both invited, and told him to take a shower.

After Yuri revealed himself right before his attempt at conquering the world with his network of psychic dominators, Tanya was among the few who were unaffected by the initial shockwave, as the San Francisco area was supposed to be controlled by a dominator that was rendered powerless after its reactor was damaged in an Allied air raid. She joined Eva Lee and Albert Einstein in the time machine. After going back in time, she swam to Alcatraz island to destroy the dominator while it was still under construction. Later during the conflict, she assisted the Commander in rescuing Albert Einstein in Egypt.

After Yuri's defeat, Tanya once again invited the Commander to the victory gala at the White House, but was interrupted by Lt. Eva who did the same, after which she complained to Einstein that the timeline was not set straight.

After Boris's team destroyed the Psychic Beacon in London, Tanya joined them in the fight against Yuri.

Like her predecessor, Tanya was often ready to confront even high-ranking military and political leaders, once notably losing her temper at General Réne Lyon in front of President Dugan and the European Council. Tanya seemingly had poor relations with General Carville, though she regarded him a competent general and was on record for missing him during Operation Time Shift.

Initially, Tanya had little faith in the Commander that she was assigned to and even lightly mocked him. However, after the first few missions under his command, she began to appreciate the Commander to the point that she refused to work under any other commander during Operation Dark Night. After the mission was completed, General Carville commented that he had never seen Tanya stick her neck out for anyone. When she was sent on another mission, she told the General to convey to the Commander her regards. Later, during Operation Free Gateway, she expressed her concern over the effects the psychic beacon would have on her and her squad, but assured the Commander that she trusted his command. By the end of the Third World War, she developed a love interest for him.

She is equivalent to the Navy SEAL in terms of capability. In Yuri's Revenge, she can place her C4 explosive into any ground vehicle in her reach, in addition to ships and buildings. These feats require hazardous close encounters. Anti-surface (especially anti-personnel) base defense structures can eliminate her (although a single Tesla coil bolt or Desolator's shot only drops her health level to critical condition rather than killing her). When placed in an IFV, she can deploy a highly effective anti-personnel gun from inside the IFV's turret. She cannot be mind controlled in Yuri's Revenge. Her pistol is ineffective against air targets.

When ordered to attack (RA2)

When ordered to attack (YR)

When an enemy tries to mind-control her (YR)

Behind the scenes - Kari Wührer