The Temple of Nod erected by the Brotherhood in Cairo is the final location visited in Renegade.

It differed from the Sarajevo headquarters in appearance mainly in that it didn't have an archway over the entrance. Otherwise, however, its exterior appearance was exactly same as the Sarajevo Temple.

It is comprised of a surface structure and three underground levels housing the main facilities. On the lowest level lies an access platform to what is known as the First Temple of Nod, over the site of which the newest temple was built.

Interior of the Temple.

The structure extending above ground houses the main hall - a long, wide hallway, ending in a row of screens showing various videos, images and TV programs from around the world. The ceiling is composed of red stained glass panels adorned with the Brotherhood's insignia. Towards the back, the ighest catwalk of the nuclear missile silo is accessible through a pair of blast doors.

The construction of this level is strong enough to withstand a direct Ion Cannon hit and remain standing, despite massive damage. However, it does not protect anyone standing in the hallway from the blast itself. 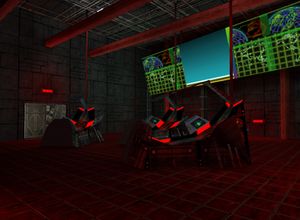 The level just below is where Kane's Netrunners work - three virtual reality machines tapped into the net are housed behind a sliding video screen wall. They act as interfaces for the hackers.

This level is the place where the main conference room of the facility is located - it consists of a large situation table and several video screens on the walls, presenting the current world-wide situation. As with all other levels, the back houses a part of the nuclear missile silo.

Interestingly, just below the concrete floor, a massive vein of Tiberium was located. 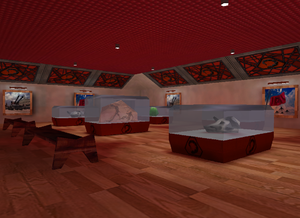 The deepest part of the facility is its largest level, where all the main facilities are located.

The first room that is entered from the second level is the Brotherhood's museum, where several artifacts are located, apparently of meaning to the Nod members, including a piece of rock with authentic ancient cave art depicting Abel's murder (the entire rock face with it was excavated by Nod), 2 portraits of two Soviet Apocalypse Tanks on parade at Moscow and a squadron of Harriers flying past a Nod flag.

This level contains the central dining hall and lounge. Several rooms are connected to the lounge, most notable of which are Kane's office and living quarters. Kane's office is composed of a large desk, a black and red scorpion's tail sculpture and a wall screen, which provided background for Kane's mission briefings during the Nod campaign of the First Tiberium War. Adjacent to the office was his bedroom, entirely made of expensive ornaments and furniture bearing the Brotherhood's insignia. For protection, his bedroom is equipped with twin Laser ceiling turrets.

On the same level are Seth's (Kane's previous right hand) living quarters and office. After he attempted to circumvent his superior's authority, he was executed during a mission briefing by the man he tried to overthrow, and his body was preserved in a large tube, kept by Kane as a trophy. Another room accessible is the greenscreen recording studio, where Kane records manipulated news reports.

In this room, there are 2 access doors to the missle silo. The last accessible room is the Temple's war room, through which access is available to the inner living quarters. The living quarters section was intended for Kane's most faithful "brothers" and was connected to the main experimentation lab and the Temple's power core.

The experimentation lab is the place where the perfected Project ReGenesis augmentation process takes place, resulting in creation of Templars. They are later be kept in stasis in specially designed tubes, to be released in case the Temple comes under attack, or Kane's life is threatened.

The base of the nuclear missile silo is located in the lab, right next to the Temple's power core. In the power core, the main ReGenesis evolution lab is located, where the most advanced mutation processes are set in motion. 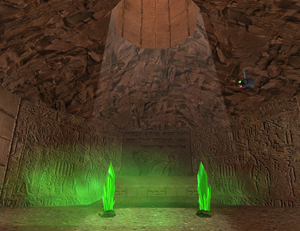 Abel's tomb underneath the Cairo Temple of Nod

The perhaps most mysterious element of the Temple is accessed from a freight elevator located in the main experimentation lab. It is a fairly simple maze, filled with green gas, ultimately ending in a large, circular room, in the center of which a large sarcophagus is located.

It is implied that entombed within the sarcophagus are the remains of Abel, the first victim of murder and Cain's brother, which seems to support rumors of Kane's immortality.

Beyond the sarcophagus, a large wall sculpture is located, depicting a man killing another. The murderer bears striking similarity to Kane himself, lending credibility to the theory that he is, in fact, Cain.

Notably, this green gas appears to be Tiberium vapor, although it isn't poisonous. The two Tiberium crystals in the room also do not seem to be hazardous. Additionally, there are two Initiates standing in front of the coffin in a strange pose: standing straight, with their arms outstretched, which they have not been seen doing anywhere else. However, upon noticing any hostiles, they quickly leave this pose and attack.

During the events of Renegade, Havoc fires the Ion Cannon at the Temple and infiltrates it to rescue Sydney Mobius. Due to the Ion Cannon strike, the upper floors are heavily damaged (although the lower floors have little or no damage) and the blast doors leading to the missile silo and primary infusion lab (where Sidney is being held) were heavily damaged and sealed off. Since he could not access the lab directly, Havoc was forced to go through all the other floors to rescue Sydney. Possibly because of the Ion Cannon, all the subjects of Project ReGenesis were released or escaped and were obstacles to Havoc's progress.

Several Black Hand legions, Stealth soldiers, Initiates, Acolytes and Templars were fought in the Temple. The mutated Elena Petrova was also working in the primary infusion lab and was killed by Havoc. At the end of the mission, Sidney set the nuclear warhead in the Temple silo (protected from the Ion Cannon by its heavy armour) to explode and she and Havoc escaped. The subsequent explosion completely obliterated the Temple.

Notably, a prototype version of CABAL was in place at the Temple. However, it took damage from the Ion Cannon and was constantly repeating warning messages like "Computer Assisted Biologically Augmented Lifeform damaged. Please switch off all non-essential operations" and nonsensical, rather humuorous phrases such as "Do not throw stones at glass houses without proper protection". However, it also seemed to be aware of Havoc's presence, as it also repeated a (again humuorusly messed-up) intruder alert message.