Of all of the weapons in the Soviet arsenal, perhaps the most aptly named is the Terror Drone. For an allied commander, these robotic arachnids inspire dread far out of proportion to their diminutive size. The now-familiar sound of mechanical legs scurrying across the ground is enough to paralyze an entire platoon of soldiers, each desperately peering from his foxhole to catch a glimpse of moonlight reflected off the Terror Drone’s metallic skin before it’s too late. For vehicle crews, whose engines mask the sounds of the approaching threat, the fear is constant and unrelenting. 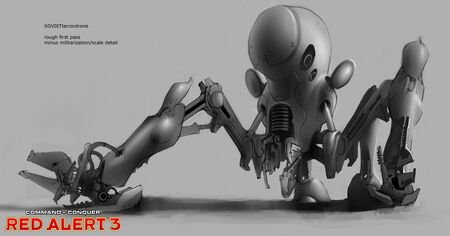 Unarmed vehicles, like Harvesters and MCVs, are especially vulnerable to Terror Drone attack.

The fear is far from unfounded. Originally developed as a remote control scout unit (a role at which it still excels), commanders soon realized the potential of the Terror Drone as a weapon platform. Early prototypes were mounted with a variety of weaponry, from machine guns to missile racks, but limited room for ammunition in the Terror Drone’s small chassis and recoil issues prevented the ranged-assault Terror Drone from ever leaving Soviet engineering labs, though further iteration on the initial design concept would ultimately result in the creation of the manned KDB-5 Sickle. To maintain the advantages inherent in the minute frame, designers opted to mount iridium-alloy claws capable of slicing through several inches of reinforced steel to each of the legs. The Terror Drone would use these Dismantler Claws, as they came to be known, to burrow into vehicles (or chest cavities, when appropriate) and then destroy the vehicle and crew from the inside.

Two problems remained. Because the Terror Drone could only be lighly armored, it was vulnerable to even small arms fire. Designers added the long-range Zmeika Electro-Stasis ray, a variable-frequency electro-magnetic beam that is able to renderer vehicles completely immobile. Because its range was longer than most other weapons, this allowed the drones to engage vehicles without exposing themselves to return fire. 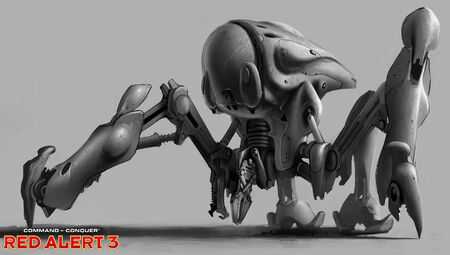 In one highly publicized case, fear of a Terror Drone attack led to the mental breakdown of a Guardian Tank driver who had never seen combat.

The second problem was more difficult. Designers realized early on that the drone needed some onboard sensory and guidance system capable of locating the weak points in enemy armor within seconds of contact to minimize the exposure to enemy fire. The vast neural networks designed for this task were fiendishly difficult to program, and development stalled until a brilliant young member of the design team, Konstantin Belousov, found a solution – program the neural net through a direct interface with a human brain. Confident in his solution, he volunteered for the process.

The experiment was a success. The newly-programmed Terror Drone destroyed vehicles 94% faster than its predecessors, increasing its kill rate and survivability. After interfacing with the drone, however, Belousov began to show signs of mental illness. He quickly fell into dementia and was finally arrested in a subway after attacking passers-by with a cattle prod. While several commentators wondered out loud whether his behavior was a result of directly interfacing with the Terror Drone’s military neural network, his condition was officially attributed to stress. The Bureau of Robotics has refused to comment on whether later versions of the Terror Drone are still controlled via human interface.

Battlefield reconnaissance has revealed at least these facts about the Terror Drone: